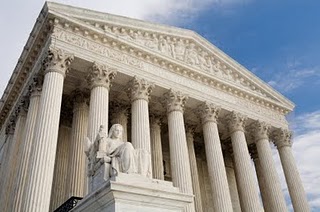 If it seems as though we have been discussing the First Amendment to the U.S. Constitution a lot lately here on the ULCM blog, it is because a great deal is happening with respect to separation of church and state. Not only has Huffington Post contributor John Elerick suggested that scripture can be used to inform political decisions, as long as it is used "ethically", but an atheist parolee was returned to prison recently for refusing to participate in a religious-inspired drug treatment program. Now, the federally recognized National Day of Prayer in the United States is expected to go ahead despite a federal court decision ruling it unconstitutional.

The annual tradition, which dates to 1952, was challenged by a group of atheists and agnostics from the Freedom from Religion Foundation, who filed a lawsuit in which they argued that it was inappropriate for the government to tell its citizens to pray. As a consequence, the status of the event came under question last month when U.S. District Judge Barbara Crabb handed down her decision, writing, "[the event] goes beyond mere 'acknowledgment' of religion because its sole purpose is to encourage all citizens to engage in prayer, an inherently religious exercise that serves no secular function in this context". The law, Judge Crabb asserted, violated the establishment clause of the First Amendment, which states, "Congress shall make no law respecting an establishment of religion, or prohibiting the free exercise thereof". It would seem, then, that government is promulgating religion by holding such an event.

A host of lawmakers and conservatives spoke out against the ruling and urged the Obama administration and Justice Department to issue an appeal, which they did, and, despite the ruling, the Obama administration went ahead with this year's National Day of Prayer, which Judge Crabbs said was acceptable since the appeals were still pending. At the event, President Obama asked Americans to "pray, or otherwise give thanks", declaring, "[t]hroughout our history, whether in times of great joy and thanksgiving, or in times of great challenge and uncertainty, Americans have turned to prayer," and "[i]n prayer, we have expressed gratitude and humility, sought guidance and forgiveness, and received inspiration and assistance, both in good times and in bad." When asked about Obama's decisions, Press Secretary Robert Gibbs said, "[p]rayer is something that the president does every day" and "the president understands, in his own life and in his family's life, the role that prayer plays". It would seem, then that Obama has sided with religious conservatives in carrying on the tradition.

But Obama's position on the issue does not seem so partisan. For many conservatives, his version of the National Day of Prayer is merely a watered down, compromised shadow of its former self in the days of George W. Bush, who actually hosted an ecumenical worship service at the event. Despite Gibbs's claim that the president prays daily, National Day of Prayer Task Force, a conservative group which strives to re-enforce America's "Christian heritage", is frustrated at the fact that no service has been held under Obama. Meanwhile, Franklin Graham, son of evangelical preacher Billy Graham and National Day of Prayer Task Force honorary chairman, reportedly stood protesting outside the Pentagon during the even for being disinvited after calling Islam "wicked" and "evil". Rush Limbaugh has even argued that the exclusion of the worship service is evidence of Obama's "authoritarian" control. Nor has Obama been able to please secular activists, it seems. Upon hearing of the Obama administration's appeal, Annie Laurie Gaylor, of the Freedom from Religion Foundation, expressed her regret over the decision and, noting the president's former career in constitutional law, said, "I would have expected something better from a legal scholar". It seems as though the demands of the law on one hand, and the country's strong evangelical voice on the other, have forced the President to play a balancing act between the two.

But exactly what should the President's position be in light of the arguments made above by both sides? Gibbs argued that the President prays routinely, but so what? This is a private act of the President's, not a function of his office. The fact that he prays in his own time in his own home or church does not therefore also mean that, at a federally recognized event, on behalf of the government, he should tell Americans to pray. His personal routine is not necessarily pertinent to his official duties. In addition, the National Day of Prayer Task Force, as well as the Obama administration itself, has argued that religion is a foundational part of American life. This is true. So what? It is also true that religion is a foundational part of American private life, not the administration of government; it is also true that the establishment clause of the First Amendment is a foundational part of the constitutional law which protects minority interests from majority nosiness. The fact that religion is a tradition in America does not therefore mean that it should also inform politics. On the other hand, secularists simply want the President to stop telling them to pray just because a majority of Americans do.

Even though it required a majority rule within each state's legislature, the U.S. Constitution was ratified unanimously by every state and serves as a guideline of carefully considered, fundamental rights to be protected against the majority intrusion in minority affairs. Ideally, given that he is a legal scholar, President Obama would make a similar observation and desist with telling people to pray, despite any wrath he might incur from the religious right. This would allow secularists to be served by a sincerely secular government; meanwhile, those of us who wish to pray at home or church would be allowed to do so under the guarantees of the very same constitution. In such an event, should not everybody then be happy?