"Gentleness, self-sacrifice and generosity are the exclusive possession of no one race or religion." -Mahatma Gandhi

Virtuous Charity is a sense of love and kindness towards all others. It is considered the ultimate perfection of human spirit because it both glorifies and reflects the nature of God. Charitable love comes from the will, and does not change regardless of what emotions it stirs up.

In Christian theology, Charity is a form of love that resembles the love between God and man. This love is manifest in unselfish love of one's neighbors. Jesus Christ was the ultimate expression and perfect example of this love.

Charity is a virtue that when ordered correctly unites us with God. Jesus' words tell us that loving God and our neighbors is most important. Everything else in the bible depends on this commandment, and Christians can exemplify this love through generosity. In the book of Corinthians, the apostle Paul describes Charity and its importance:

Though I speak with the tongues of men and of angels, and have not charity, I am become as sounding brass, or a tinkling cymbal. And though I have the gift of prophecy, and understand all mysteries, and all knowledge; and though I have all faith, so that I could remove mountains, and have not charity, I am nothing. And though I bestow all my goods to feed the poor, and though I give my body to be burned, and have not charity, it profiteth me nothing.
Charity never faileth: but whether there be prophecies, they shall fail; whether there be tongues, they shall cease; whether there be knowledge, it shall vanish away. For we know in part, and we prophesy in part. But when that which is perfect is come, then that which is in part shall be done away...
And now abideth faith, hope, charity, these three; but the greatest of these is charity.
1 Corinthians 13:1-12

Paul's meaning here is that no matter how strong, faithful, intelligent, or talented we may be, if we do not use these gifts to help each other it is a waste. Charity is virtue applied.

"Do not turn away a poor man even if all you can give is half a date. If you love the poor and bring them near you God will bring you near Him on the Day of Resurrection."- Al-Tirmidhi, Hadith 1376

In Islam, Charity is not recommended but required of every financially stable Muslim. One of the five pillars of Islam (five basic acts considered mandatory by believers) is Charity. The belief is those who have more than they need should help those who are less fortunate.

The Qu'ran gives specific instruction on how Charity should be implemented. Muslim law imposes a graduated tax on the wealthy for the benefit of the poor. The rate is 2 percent, and this figure is applied to both income and current holdings. The poor do not pay this tax, but those in the middle and upper class should annually give some of their wealth to the poor.

Those who are charitable are looked upon with favor, especially those who give in secret. The Qu'ran says: "If you give charity in public, it is worthwhile (for it will persuade others), but if you hide and deliver it to the poor in secret that is better for you. And Allah will remove from you some of your sins due to this Charity." (Al-Bawarah 2:271)

In Arabic, this kind of charity is called zakat. Zakat literally means "purification", because it purifies the greed out of one's heart. It is not wrong to be wealthy, but if one acquires wealth for it's own sake and does not share it with others in need, his actions are condemned. People should acquire wealth with the intention of spending it on their needs of others as well as their own.

Those with wealth are obligated to respond to the struggling members of the community. In Islam, God is the true owner of everything. All wealth comes from God, it is not ours to hoard in greed, or to lend out on interest. Islam is the antithesis of this kind of attitude. Wealth is meant to be shared with those who need help getting back on their feet.

"Sanity-destined people have these character traits: Acts of charity, self-restraint, sacrifice, dedication to the study of scriptures, austerity and uprightness." -Bhagavad Gita, 16.1 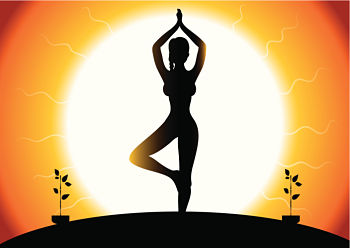 Central to Hindu belief are the four yogas. When most of us hear "yoga" we are likely to think of stretching, breathing exercises, and foam mats. But yoga has a different context in Hinduism. Yoga means uniting with the ultimate goal by being placed under disciplined training. There are four yogas, or four paths to truth.

One of the yogas is Bhakti Yoga, the path to God through love. The goal of Bhakti Yoga is to direct toward God the love that lies in the human heart. Love is the most powerful emotion, and our lives are powered more by emotion than reason.

Followers of Bhakti Yoga don't strive to completely understand God, but instead to love God with every element of their being. This means not just to claim that love, but to love dearly, and everything else in life is loved in relation to God. This love is not for freedom or to be loved in return, but for love's sake alone.

Here Hinduism and Christianity find common ground. Hinduism would view Christianity as a brilliantly lit highway toward God because all the basic principles of Bhakti Yoga are exemplified in Christianity.

When one has a heart full of love, that love in turn encourages Charity and generosity. The elevated love, called prema, is a sacrament. It is selfless, not expecting anything in return. When people give generously, this is called _daa_n. It's practice has the effect of purifying the mind of the giver. The reciprocal relationship between love and generosity work towards bringing one closer to God.

Christianity, Islam, and Hinduism see Charity through a different viewpoint, and each religion brings out it's different aspects. That all seem to agree that true Charity is given without any expectation of reward or recognition.

Christian Charity is synonymous with love. Love connects us with God, and loving God and our neighbor as ourself is the greatest commandment. We can follow Jesus' example by giving from a place of love, and without any thought of reward.

Charity in Islam is implemented in a more direct way: it is law that the wealthy give to the poor and needy. Whatever wealth one may have comes from God, and that person has a responsibility to give some of it away. When we give without the desire for reward or recognition, we are purifying our souls.

Hinduism is much like Christianity in it's approach to Charity. Charity should come from a place of love. When we love with our whole being and act with generosity and benevolence, our minds are purified. By continuing this path, one may reach God.

How Can I Be Charitable?

Donate things you don't need. Some of the easiest items to donate include clothes, books, utensils, shoes, and toys. Charities with thrift stores will sell these items to raise cash for their charity. Day cares, hospitals, and churches may also accept donated items. Donating older items you don't need anymore is a great way to practice charity for those who have a tight budget.

Volunteer. Our time can be as valuable as money or donated items. As a volunteer, you are working to further to goals of whatever organization you choose. Often times, volunteers are needed for community projects and by helping, you are helping your community. Volunteers can also serve those in need more directly by working with children, in soup kitchens or in retirement homes.

You can also be charitable in your everyday life. If you see someone who needs a hand, help them out. This may include giving someone a battery jump, helping someone move, or helping someone with directions. These situations happen at random, but by keeping an eye out we can find instances where we can demonstrate Charity.