Weddings Go High-Tech–But Is It Enough? 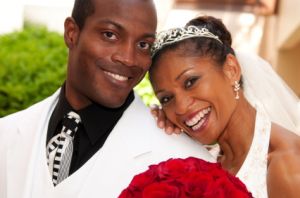 With the flurry of new gadgets flooding the market, it is only a matter of time before high technology completely transforms the way weddings are held. While this change has its drawbacks, it has a vast number of benefits and conveniences for brides and grooms-to-be, as well as their wedding officiants. Nowadays, almost every aspect of a wedding can benefit from some recent advance in social networking and communication technology. But should we stop at incorporating fancy gadgets into our ceremonies, or should we go further and take a hard look at the old-fashioned wedding traditions to which many of us still cling?

Traditionally, attending to personal obligations back home meant that people had to politely decline requests to join their friends' wedding parties, but not anymore. Just as young couples can solve the problem of how to find a wedding officiant by asking a friend to get ordained online, nowadays bridesmaids and groomsmen can attend the ceremony through live streaming video. As the AP reports, one bridesmaid who couldn't attend her friends' wedding participated through a live streaming video session on Skype, while some couples choose to stream live video footage of the ceremony for guests who could not attend. Granted, it isn't the same as being there in the flesh, but it's a creative way of getting around geographical obstacles and domestic duties.

In addition live streaming video, couples are using the Internet Web sites and resources to plan and perform a wedding ceremony and reception. No further need to stuff cash gifts for the bride and groom into an envelope that will only get lost--the Internet now serves as a highly convenient way to accept wedding gifts. Nicole Endres, 25, of Centreville, Va., and fiance Dan Rodriguez, 28, requested cash wedding gifts for their honeymoon on their wedding Web site using Honeyfun.com, which allows them to transfer funds directly from PayPal to their bank account. Other wedding guests are using sites like Depositagift.com. It may seem a little bit impersonal, and some people prefer the intimacy of a physical gift, but one thing is certain--it makes life easier for both the giver and the recipient.

But weddings are not just about getting people to the ceremony or receiving gifts; planning is fundamental to the perfect wedding, and some couples are now corresponding with their wedding parties using social networks, while more officiants are obtaining necessary ministerial supplies online. Alexandra Linhares, of Marietta, Ga., started up a private Facebook group to discuss the logistics of her wedding with members of her bridal party, who were scattered across multiple states and countries. By doing this, couples can chat with members of their bridal party without sending mixed signals about who's invited and who's expected to participate.

High-technology is not restricted to wedding planning, though; it is also playing a bigger role in the ceremony itself. Tablets, smartphones, and social networks now serve as tools for carrying out the ceremony and reciting wedding vows. At the wedding of Caryn Hallock and Steve Poland in Buffalo, N.Y., the bride and groom sent one another Facebook marital status update requests with their smartphones at the same moment as they accepted one another as husband and wife, and their officient, a friend who decided to become ordained online to perform the ceremony, recited the vows using an iPad. Such proliferation of newfangled gadgetry may seem

tacky to some, but they're life-saving for others.

This is only the tip of the iceberg, as it were, when it comes to the way in which couples are integrating technological innovations into their wedding ceremonies: brides are using apps to find wedding dresses, couples are keeping track of RSVPs on their smartphones, and they are using special apps to keep track of wedding expenses. But if young couples are so willing to embrace new technology to tie the knot, shouldn't they also be willing to embrace new social ideas in their ceremony? Brides are savvy enough to go digging smartphones out of their dresses to change their Facebook marital status at the moment they say, "I do", and that's all very cute, but most of them are still waiting for the man to propose. Meanwhile, fathers are still walking their daughters down the aisle and "giving" them away as though the fathers own their daughters, and bridal parties are almost always exclusively female, while the groom's party is almost always exclusively male. Maybe the next step to updating the traditional wedding ceremony isn't to accommodate new high-tech ways of making the special day happen--maybe it is to challenge assumptions about the roles of bride and groom, and to consider how they can work to build a modern relationship based on equality and mutual respect.

As an ordained ULC minister, do you have any anecdotes to share about weddings that incorporated new technology in creative or amusing ways? Do you think it is enough, or should we try to challenge outdated social mores inherent in the wedding ceremony, too?