Uniting Traditions with the “Menorah Tree” 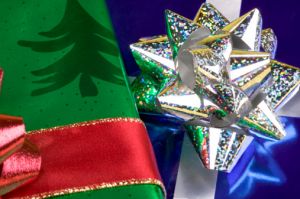 You have probably heard people say that the benefit of having divorced parents is that you get twice as many Christmas presents. It might also be said that the benefit of having both Jewish and Christian parents is that you get presents on Christmas as well as on Hanukkah. But interfaith celebrations are not just about getting more presents they are also about uniting seemingly disparate traditions on common ground, as exemplified by the "menorah tree", a giant menorah covered in pine needles and Christmas tree ornaments.

The religious syncretism displayed by such symbols has fielded a great deal of criticism by conservatives. Such criticism isn't justified, according to Rabbi Brad Hirschfield. "What religious custom isn't at least somewhat syncretistic? Every sacred tradition belonging to every religion I know was once an innovation", he says in a Huffington Post article, "and most of them have their roots in, or were borrowed from, some other community. And that is especially so for Hanukkah". In other words, critics of symbols like the menorah tree would be hard-pressed to find a holiday custom that is "pure" and "unadulterated".

Indeed, Hanukkah is a fine example of a holiday which blends and borrows from different religions, as Hirschfield explains, so the menorah tree is nothing unusual. "Hanukkah celebrates a group's willingness to break the inherited rules of the Sabbath in order to fight like their enemies, tell the story of that fight not in Hebrew but in Greek", and "popularize a candle-lighting practice remarkably related to the use of sacred fire by the Zoroastrians among whom they lived", he writes. Likewise, modern-day Christmas trees derive from pagan winter solstice decorations.

A Symbol for Interfaith Families

The blending and borrowing from different religions described by Hirschfield seems like a natural step in the evolution of the "holiday season", especially for interfaith families, who continue to increase in number. When a Jew and Christian marry each other and when neither sees a theological conflict since neither is theologically conservative what better way is there to celebrate the season than with a menorah decorated with Christmas tree ornaments, or a Christmas tree decorated with dreidel and Star of David ornaments?

The menorah tree is just another way for interfaith families to symbolize unity in faith. Red, green, and gold meet blue, white, and silver.