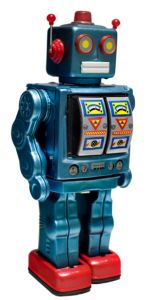 How would you like your wedding officiant to be C-3PO, the saucer-eyed bronze-plated android from Star Wars? Perhaps you would prefer to have his counterpart, the garbage-bin-shaped R2-D2, as your ring-bearer. The concept is not as far-fetched as it may seem. Already, brides and grooms are choosing to employ the latest in robotic technology to give a unique, modern twist to their wedding ceremonies, and even Universal Life Church ministers are getting in on the game.

One of these trailblazing couples are Sam Vilain and Melia Meggs, who were married last June in Santa Cruz, California. Vilain wanted his friends in New Zealand to witness the wedding live, so he decided to rent some robots from a company called Anyrobots. The goal was simple: allow people to participate in the wedding by controlling the robots from halfway around the world. And it worked. Using an app downloaded from Anybots, Vilain's friends were able to navigate the robots electronically and interact with other guests via teleconferencing. The robots feature a flying-saucer-shaped device mounted with cameras and attached to a pole and a base with two wheels.

But robots have have also played instrumental roles in the ceremonies themselves. At the wedding of Neeva Reese and Moe McLendon in San Juan Capistrano, California, a robot with glowing red eyes named Father Emiglio served as wedding officiant. The groom constructed the unusual wedding minister using the shell of an Italian toy robot called Emiglio, an array of Lego blocks, vacuum tubes, and antennae, a Star Wars Y-wing starfighter for a nose, and ribbon cables for mutton chops. Meanwhile, mechanical engineer Laura Wong used a robot from work to serve as ring-bearer at her wedding.

It probably will not come as a surprise that Universal Life Church ministers are among those spearheading robot weddings. Jon Schmig, a minister ordained online in the Universal Life Church, built his own robot ring-bearer for his friends' wedding, creating an app that allowed him to transmit a signal from his mobile phone to the robot. This allowed him to control the robot and make it dance with wedding guests, including young children. Schmig also supplies the voices of robots to officiate weddings.

Much like the trend of getting ordained online, robot-inspired weddings show just how much technology has shaped the modern wedding ceremony. What do you think? Would you ever say "I do" in front of a minister made of scrapyard metal?