Spring Returns with the Pagan Festival of Imbolc

With a swath of North America experiencing snow and freezing temperatures, Spring couldn't seem further away. Undaunted by this, many Pagans ushered in the season with Imbolc celebrations. Imbolc, which normally falls on 1 or 2 February, marks the astronomical midpoint between the winter solstice and vernal equinox, when revelers divine the weather and celebrate the lengthening days with rituals celebrating the cleansing properties of fire and the rejuvenating power of goddesses. Curiously, this ancient holiday may have influenced some modern-day traditions.

Rebirth, Purification, and the Goddess of Fire 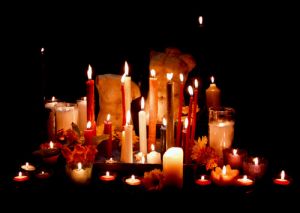 Imbolc (pronounced EEM-owk) is closely associated with birth and the return of life. The name itself means "in the belly" in Old Irish, a reference to the pregnancy of ewes, the lambing season, and the time for mother animals to begin lactation. Fire is central to Imbolc for its powers of purification. In ancient times, and also among some modern-day Reconstructionists, cattle were led between burning bonfires to ward off disease. Hearthfires and candles are also set to invoke the return of longer days, and weather divination is commonplace.

This cleansing power of fire is closely associated with St. Brighid, based on the red-haired Irish fertility goddess Brighid. On Imbolc Eve, she is believed to visit the homes of the virtuous and bless the sleeping occupants. In some traditions she is welcomed at the door with a bundle of rushes, which are then laid down to make a bed for her, and she is also supplied with food and drink. Sometimes articles of clothing are left outside for her to bless and a doll-like effigy of her, called a Brídeóg, is led from house to house by a procession of white-clad women.

The Pagan Roots of Groundhog Day

As mentioned, Imbolc is also a time to divine the weather. For pre-Christian Europeans, Spring began if serpents, badgers, and other creatures were observed leaving their dens, but winter continued if they remained inside. Vestiges of this tradition survive in the North American holiday Groundhog Day, when the legendary rodent Punxsutawney Phil leaves his den. If the weather is sunny and the creature sees his shadow, he retreats to sleep, indicating six more weeks of winter; if the weather is cloudy and he sees no shadow, he remains outside, indicating the arrival of Spring.

The remote pagan past might seem alien to most of us, but it survives in modern-day folklore traditions. Seasonal symbols of rebirth, rejuvenation, and purification apply to all of us. How do you celebrate this time of year, if at all?