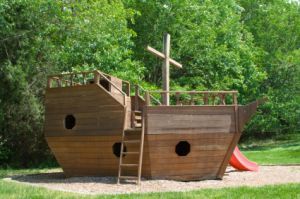 A new Biblical them park will soon be opening up in the rural U.S. state of Kentucky. The park, called the Ark Encounter theme park, is being built by Answers in Genesis, the same organization that built the Creation Museum, and will feature a giant replica of Noah's Ark. The only problem is that the state is using public money to help fund the park's construction.

The park picks up where the Christian creation myth leaves off, telling the story of the great flood from the biblical book of Genesis and following with the rest of the Old Testament. Much of the construction costs are being funded by the people of Kentucky, not through private donations or other sources. According to Cathy Lynn Grossman of USA Today, The Baptist Press said that the state's Tourism Development Finance Authority "unanimously approved tax incentives that will allow Ark Encounter LLC to recover up to 25 per cent of its construction costs through sales tax rebates if it meets attendance and sales projections." In other words, a state agency is remitting part of the company's sales tax dollars to encourage construction of the theme park.

Any doubts over the evangelical purpose of the park can be eliminated by taking a look at the mission statement at the Answers in Genesis Web site. According to Grossman, the statement reads that the "ministry of Answers in Genesis", which endorses the Christian concept of salvation, "can't think of a more effective way today to share the gospel with so many millions of people than an Ark", and that the "Ark of Noah is a picture of salvation, which allows us to also share with future visitors that Christ is our modern-day Ark of salvation", adding that people "who might never visit a church to hear the gospel will get that message at the Ark Encounter." Essentially, then, Kentucky, too, is endorsing the Christian concept of salvation by remitting sales tax money back to Answers in Genesis.

Not everybody is happily letting Kentucky off the hook, however. Grossman quotes a recent editorial in the New York Times which accuses the state of blatantly violating the First Amendment to the U.S. Constitution: "Granting tax incentives to the explicitly Christian enterprise clearly clashes with the First Amendment's prohibition on government establishment of religion" said the author, noting that "[p]ublic money is not supposed to pay to advance religion. Kentucky's citizens should certainly ask themselves if this is really the best use of taxpayer dollars." Thus, while so many states are getting away with funding religion, there are still a great many voices in the public which are openly decrying such practices, suggesting a relatively healthy suspicion of religious influence in government.

Nevertheless, the situation in Kentucky is unsettling. It is somewhat ironic that a nation which prides itself on a constitution barring state religion should, at the same time, so readily allow its constituent states to incentivize religious instruction through tax rebates. (In a previous blog entry, we discussed how the state of Arizona is granting similar tax rebates to individuals who donate to religious schools.) Meanwhile, children in the United States are lagging far behind children in Europe, Canada, Japan, and other parts of the world in terms of math and science literacy. One would think that tax money would be better spent on the arts, medicine, technology, or scientific advancements than on the specious theory that dinosaurs roamed the earth side-by-side with man.