Smart Tattoos: Mark of the Beast? 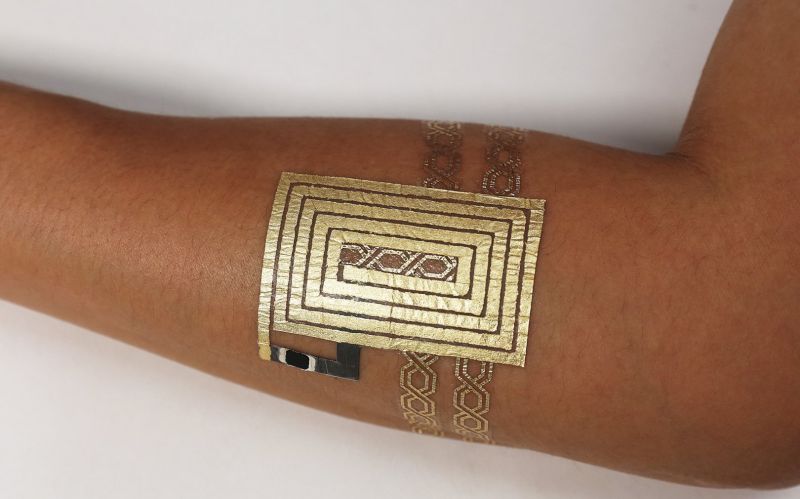 Nowadays technology is getting smaller, more powerful, and more convenient. If there's one thing to be said about this generation, it's that we love our gadgets. From smart phones to drones, we've come a long way in just the past ten years. On that note, a new innovation caught our attention recently. Researchers at the Massachusetts Institute of Technology (MIT) have created a unique way for us to interact with technology and share information: temporary smart tattoos. This breakthrough has the potential to change our lives for the better. However, some have been off-put by its striking similarity to the Biblical "mark of the beast".

The idea for smart tattoos came from a PhD student in the MIT media laboratory. She said it was in response to the sort of conformity that currently dominates the market for personal devices. As much as we champion our iPhones and Androids, in reality they are all quite similar in capability and overall design.

These smart tattoos can have completely customized looks using the basic building blocks of a lithium polymer battery and a small computing chip. This fascinating technology allows your skin to transform into a track-pad, like those used to control a cursor on your computer or in a video game. It can also hold information that can be read by smartphones with a simple touch or picture. Some will even change color when they sense a change in your body temperature.

Mmart tattoos are applied to the body the same way as their more traditional counterparts. You place the decoration with its paper backing face down on the desired patch of skin, moisten the backing, and press and hold the tattoo to the skin. When you gently peel away the backing, you're left with a metallic, geometric design that lasts for a few hours, or until it is rinsed off.

Of course what sets these seemingly simple marks apart is their technological capability. The emblem itself is made of gold leaf, which conducts electricity and can sense your touch, detect heat, and communicate with other electronic devices through Near Field Communication (NFC), which is commonly used by retailers to take payments from smartphones.

Mark of the Beast Spells Damnation

In 2013, Regina Dugan, previous head of the Pentagon's research arm and currently working for Google, wore a precursor of these smart tattoos at a media event. Like those made at MIT, hers also used gold leaf, but rather than using a chip to relay information, the design itself contained information used to authenticate her identity. She proposed it as a possible avenue to solve the problem of identity theft.

While this all sounds potentially groundbreaking and exciting, some Christians may see parallels between this concept and the Biblical "mark of the beast" prophesied in the book of Revelation.

The last book of the Bible details visions of the events leading up to the end of the world, including the rise of an evil leader referred to simply as the beast. Prophecy often employs colorful metaphors, so understanding Revelation requires quite a bit of interpretation. At some point, the beast has a very large population following him and he creates a mark and a number (666). The inscription of these on the body appear necessary for participation in society:

"And he causeth all, both small and great, rich and poor, free and bond, to receive a mark in their right hand, or in their foreheads: And that no man might buy or sell, save he that had the mark, or the name of the beast, or the number of his name." Revelation 13:16-17 KJV

A more permanent version of the smart tattoos could conceivably be used in the future for identification, purchasing, as a way to carry your medical history, and much, much more. Individual smart tattoos already have the capability to carry out these specific functions, so it likely won't be long before one tattoo could perform a complex combination of all of them. Understandably, something like this could be very important to daily life in the future.

What's worrisome about this idea is that the mark of the beast is said to have long-lasting effects. Firstly, those that do not accept it on their person could potentially not only have difficulty receiving medical treatment, buying and selling goods, or gaining access to some public areas, but it is said in the Bible that they could be killed as punishment for noncompliance.

Accepting the mark, however, could raise some eternal problems for your soul. Revelation seems to imply that having the mark is tantamount to worshiping the beast over God, thereby forfeiting salvation and earning you a spot in Hell. Again, the language of prophecy isn't clear-cut and there are a diverging popular interpretations.

This certainly leaves a lot to ponder over. to those who believe the prophecy, do you think these smart tattoos could be precursors to the mark of the beast? Religion aside, we'd like to hear your opinions on combining the human body with technology -- have we discovered a new frontier, or is this innovation a potential danger to society?