Searching for the Garden of Eden

The Garden of Eden is a well-recognized name in the religious world. Although it features prominently in the Bible, parallel examples are found in other religions, too. Due to its notoriety, the Garden of Eden has immense significance to many. The exact location of the ancient garden has long been sought after humans have kept up the search for hundreds of years. So far, though, it has yet to be found. Although its whereabouts remain a mystery, many people have theorized about the location of the Biblical paradise. So, what do we know?

The Garden of Eden is described in the opening chapters of Genesis, the very first book in the Bible. Within the story, there are several clues regarding its location. Most notably, the Garden of Eden contained a spring that split into four big rivers, each flowing out in different directions. One of these rivers was named the Euphrates. Naturally, then, scholars began scouring maps for an area where the modern day Euphrates river intersects with other major waterways.

The most obvious of these intersections is a wetland region in southern Iraq, near the ancient city of Babylon, where the Euphrates meets the Tigris river.  Some biblical scholars believe this must be where the Garden of Eden was. However, their theory clearly fails to account for the other two rivers in the story, the Pishon and the Gihon. Despite this omission, the Iraq theory remains one of the most popular out there.

However, there is by no means a consensus as to the Garden's location. Several competing arguments have been put forward by those skeptical of the Iraq theory. The first suggests that we've been looking in the wrong place all this time the Bible refers to one of the areas surrounding the Garden as "Ethiopia". Though place names often change over time, this fact has led some to speculate that the Garden of Eden was actually somewhere in Africa.

Another theory uses geologic evidence to suggest that the Garden was actually somewhere near Jerusalem. In ancient times, a large aquifer was located under Israel -- leading some to argue that the four rivers referenced in the Bible may have simply bubbled up from beneath the ground and flowed out from Garden that way. However, as with the Iraq theory, there is no definitive proof this was the case.

Unfortunately, the search for the Garden is complicated by differing accounts of what the place was like and what happened there. As mentioned in the introduction, versions of the Garden of Eden appear in many faiths. In Judaism, for example, the Garden is described as being divided into two separate spiritual places, the "lower Gan Eden" and the "higher Gan Eden". The lower area is said to be similar to the biblical Garden: terrestrial, vibrant, and fertile, while the higher area is more celestial, and inhabited by immortal souls.

In the Islamic faith, as in Christianity, Adam and Eve inhabit the Garden of Eden. But accordingly to the Qur'an, Satan transforms into a serpent and proceeds to trick Adam and Eve into eating from the tree of immortality, and thus disobeying Allah.

The Mormon faith offers yet another version it teaches that upon being expelled from the Garden of Eden itself, Adam and Eve went to live in a place called Adam-ondi-Ahman. According to LDS doctrine, this area is located somewhere in Missouri. However, there has been some debate as to its exact location within the state, and to this day it remains a point of contention.

No matter where the Garden of Eden was, chances of finding its location are relatively low. Since no hard evidence has been found, we cannot rule out the possibility that the 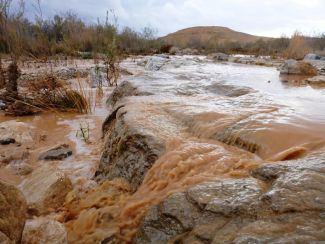 Garden was simply an allegorical paradise.

If indeed it was an actual location on the map, chances are it's long gone by now. The Biblical story holds that the great Flood experienced by Noah affected the entire world. While a global-scale flooding event seems improbable, smaller scale regional floods would still have the power to destroy something as fragile as the Garden.

In fact, there is some research to back this up. Geologic evidence suggests that severe flooding events may have taken place in the region thousands of years ago, the scale of which would have profoundly reshaped the landscape. If we assume the Garden was located somewhere in the Middle East, in all likelihood it was destroyed long ago.

In that sense, the Garden of Eden may be similar to Atlantis a fabled place sought by many an explorer, but never actually found. After thousands of years of geologic change, wherever the Garden once stood would likely look very different today. Unfortunately, the ongoing search for its location appears futile. While the Iraq theory may be the most probable, there is no way to confirm it.

Focusing on the bigger picture, we see a fascinating characteristic of human nature: the yearning for discovery. We, as humans, go to great lengths to explore the unexplored, chart the uncharted, and find the unfound. Despite our best efforts, it's become clear that discovering the true whereabouts of the Garden of Eden will take a miracle.