Is Church Bad for Your Health? 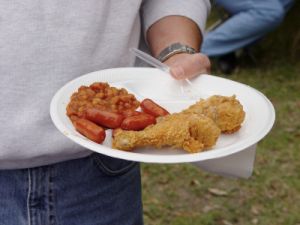 Take a look at this picture. You will notice that there is not a single serving of fruits or vegetables on the man's plate of food. And there are not one, but two drumsticks.

Most of us are familiar with the claims that Americans are fatter and more religious than their peers in other industrialized nations. Now, a new study links higher obesity rates with more frequent church attendance. This finding flies in the face of previous studies which link religiosity with greater well-being, creating a more complex picture of the relation between health and religion.

The longitudinal study, conducted in the U.S. city of Chicago at Northwestern University's Feinberg School of Medicine, tracked 2,433 women and men over the course of eighteen years in the cities of Chicago, Minneapolis, Oakland, California, and Birmingham, Alabama. The study's researchers defined frequent church attendance as going to church at least once a week. Most subjects were Christian. The results indicated that people who attended a church sermon or worship service frequently were fifty per cent more likely to become obese by middle age than people who did not attend church frequently.

It is unclear why people who attend church frequently tend to be fatter than those who do not. The study's lead researcher, fourth-year medical student Matthew Feinstein, explained his view of the results: "We don't know why frequent religious participation is associated with development of obesity, but the upshot of these findings highlight [sic]a group that could benefit from targeted efforts at obesity prevention", he said, according to Stefano Esposito of the Chicago Sun-Times. In other words, suggests Feinstein, despite the lack of clarity over how religiosity relates to health, the study still identifies a group (church-goers) that deserves greater attention with respect to healthy lifestyle habits.

Still, there are many theories about how church attendance relates to obesity. One of these theories comes from Courtney Parker, the catering manager for the twenty thousand-member Apostolic Church of God, a suburban Christian megachurch just outside Chicago. Paraphrasing Parker's opinion, Esposito suggested that "there may be a historical connection between over-eating and going to church. In years gone by, so many things were taboo but not eating". Historically, "church services ran long", Esposito quotes Parker as saying, so after church "the first thing you do is go eat, and then you go to sleep". In other words, Parker suggests, eating was a social activity in the church, and gluttony did not carry the same weight as other "sins", such as lust or adultery.

But do these conclusions suggest that religion is bad for one's health? The picture is not necessarily so black-and-white.

Once again, however, the picture is made foggier by research on the well-being of global populations. Another 2010 Gallup poll listed the happiest countries in the world based on four criteria: 1) percent thriving, 2) percent struggling, 3) percent suffering, and 4) quality of overall daily experience. The United States is widely considered more religious than Scandinavian countries such as Denmark, so if religiosity increases one's sense of well-being, the United States should be happier than Denmark. However, the researchers concluded that Denmark was the happiest country in the world (with 82% thriving, 17% struggling, and 1% suffering), while the United States was only the fourteenth happiest (with 57% thriving, 40% struggling, and 3% suffering). The quality of daily experience score was 7.9 for Denmark, and 7.3 for the United States. Given these results, it is unclear that religion always acts as a boon to one's health and well-being.

The point is that sometimes religiosity and church attendance may be good for your well-being, and other times they may not. Perhaps in the United States, many people still rely on organized religion for economic security (especially in the Baptist and other Protestant denominations) while in many other industrialized nations, people do not need to rely on organized religion for security because the government provides it for them. At the same time, however, religion may also play a role in inhibiting healthy lifestyle habits. For now the jury is out, but hopefully future research will shed further light on the matter.

Give us your thoughts as a ULC interfaith wedding minister ordained online. Do churches nurture lifestyle habits which lead to obesity, do they encourage healthy habits, or is it a combination of the two?