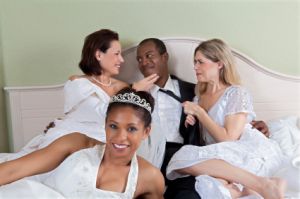 Recently on the ULC Monastery blog, we discussed the HBO series Big Love, which follows the lives of several polygamists in a fundamentalist Mormon sect. In one episode, one of the characters attends a pro-polygamy demonstration. But can polygamy be protected as a form of religious freedom? In British Columbia this question is being mulled in a court battle over whether or not polygamists have the constitutional right to legally wed. But perhaps it is possible to separate polygamy from the harms normally associated with it, banning the negative forms of it while recognizing the positive ones.

The Canadian law banning polygamy is being challenged in B.C. Supreme Court by opponents from the rural town of Bountiful, BC who belong to the church of Fundamentalist Latter-Day Saints (as distinct from the mainline Mormon Church of Latter-Day Saints, which no longer recognizes polygamy). Polygamy is a deeply-held religious practice in the FLDS church, they aver, therefore it should be included in protections for the free exercise of religion found in the Charter of Rights and Freedoms. Proponents of the ban counter that polygamy especially the religious variety harms and exploits vulnerable people such as young women and children, and that the ban is necessary to protect the well-being of these individuals.

One proponent of the ban is Craig Jones, a lawyer who is defending the law in court. During his third day of final submissions to the court, Jones contended that "[w]e've seen the extent to which religion is used as the control mechanism, as the enforcement mechanism that magnifies the harm of polygamy", according to a quotation from the Hamilton Spectator. The newspaper also quoted him as saying,

The evidence that has emerged from expert and lay witnesses alike is that the greater the religious fervour with which polygamy is intertwined, the more harmful it can be expected to be. There is something significantly harmful about the religious manifestation of polygamy.

For Jones, then, religious polygamy is the worst kind of polygamy, perhaps because religious fervour and conservative religious opinions about the roles of women and children encourage the "farming" and "corralling" of women and children as if they are chattel to be traded and consumed. Thus, polygamous relationships, he suggests, should be exempt from laws concerning legal wedding officiation, and individuals who solemnize such unions should be punished. Indeed, people like Jones cite polygamy is a source of crimes such as human trafficking, illegal detainment, rape, child molestation, and so forth.

But is polygamy really inherently and inextricably intertwined with crimes against women, children, and humanity? Certainly, we must be vigilant about protecting the young and vulnerable from sexual exploitation and coercion, but sometimes polygamous relationships and plural marriages are entirely mutually consensual for the parties involved. Relationships involving more than two people may not necessarily entail sexual abuse and exploitation. For this reason, it is crucial to distinguish between polygamous relationships which involve exploitation of youth and children, and those which involve legal adults who enter the relationship voluntarily.

It remains to be seen whether the federal Canadian law banning marriage ministers from performing polygamous weddings will be repealed due to the court case in British Columbia, but hopefully the final decision will protect as many people's rights as possible. From one point of view it is important to have such a law to prevent people from treating sexual exploitation as a "religious right", but it may also impinge on the religious right of mutually consenting adults to enter into a legally recognized relationship.

As a nondenominational wedding officiant and minister ordained online, what do you think about the polygamy court case in British Columbia? Should wedding ministers have the religious freedom to legally marry more than two people to one another if every person being married is a consenting adult? Does polygamy always involve sexual exploitation, or can it also involve adult consent?