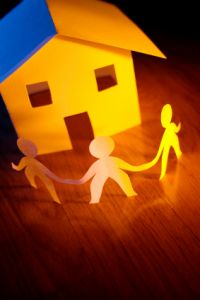 Amid the vast mega-church compounds which dot the stale, suburban American landscape sit a number of unassuming little houses where, every Sunday, small handfuls of the pious gather to worship, read passages from the Christian scripture, and partake in the sacrament. Increasingly, American Protestants are opting to forgo the corporate mega-church experience in favor of smaller gatherings inside private homes, returning to the tradition of a more democratic early church.

While the setting of home churches is unconventional, their theology can vary widely from evangelical and legalistic to free-thinking and progressive. One of the driving forces behind the home church movement is a growing disenchantment with the massive, anonymous congregations of bigger churches and a desire for greater intimacy. According to Ed Stetzer, a seminary professor and president of Lifeway Research (which is affiliated with the Southern Baptist Convention) "part of the appeal for some in the house church movement is the desire to return to a simpler expression of church". He adds that "[f]or many, church has become too much (like a) business", noting that at the same time, home church proponents "just want to live like the Bible."

With their ostensibly grass-roots approach to religious worship, house churches seem to fill a void left behind by large-scale, highly organized religious institutions characterized by well-defined hierarchies, ecclesiastical canon laws, and church constitutions. As Linda Stewart Ball of the Associated Press explains, "House church proponents claim their small groups are sort of a throwback to the early Christian church in that they have no clergy and everyone is expected to contribute to the teaching, singing and praying." At most house churches, she reports, pastors and ministers preaching from pulpits are conspicuously absent, and congregations "consist of 12 to 15 people who share what's going on in their lives, often turning to Scriptures for guidance. They rely on the Holy Spirit or spontaneity to lead the direction of their weekly gatherings". Worship at many of these gatherings "is a lively, sometimes chaotic event, with noisy and mostly happy young children flitting about". In addition, such gatherings feature potluck dinners as well as their own Eucharist, in which adults partake in blessed sacramental wine while children enjoy grape juice.

It is perhaps this return to an earlier, egalitarian form of Christian worship which is most intriguing about house churches. As Barbara Ehrenreich observes in her book Dancing in the Streets: A History of Collective Joy, which discusses the early ecstatic roots of religious worship, the early Church was largely viewed by the Romans as an obscure, underground cult characterized by a dizzying blurring of the boundaries between male and female, young and old, rich and poor. There was no formal pecking order, nor were church services solemn affairs. People danced, laugh, drank, dined, and succumbed to fits of ecstatic trance in which they sought to commune with the divine. While house church services may not be a historical re-creation of these early Greek and near-Eastern Christian cults, they do feature the disorganized tumult, dancing and singing, and focus on personal mystical experience and transcendence which seems lacking in many larger churches.

Like many sectors of the economy the hospitality industry, the retail industry, and even real estate religion is being downsized to create a more accessible, "boutique" atmosphere. Perhaps there is a point where people become dissatisfied with the crowd, with mass-assembly, and with somebody up there on-stage telling them what the allegedly inerrant word of God really means while they sit meek and silent in their hard pews. But perhaps the most significant thing about the house church movement is the fact that spiritual insight no longer rests in the controlling hands of dogmatic priests, but has been given back into the hands of spiritual seekers. Like anything else in the creative economy, it represents a shift back to a more interactive, interpersonal experience where at least a trace of divine truth can be more directly ascertained.