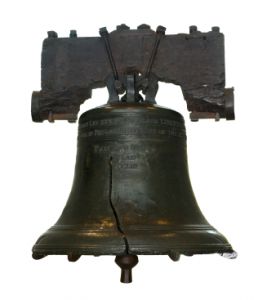 Pennsylvania is well known for its Liberty Bell the venerable landmark which symbolizes U.S. independence from British rule and which, by its name, connotes freedom from tyranny and oppression (ironically, the British Empire outlawed slavery decades before the "Land of the Free" did), so it is a little disconcerting that over two hundred years after the founding of the bastion of freedom known as the United States, one of its original thirteen colonies should have instituted a law violating one of its foremost tenets separation of church and state. It also challenges the teleological view that everything progresses towards an ideal state or a final resolution at least when we get lazy.

The law in question was passed in the "Keystone State" in 1977 and explicitly bans "blasphemy" whatever that is supposed to be. In 2007, video producer George Kalman set out to christen his new business "I Choose Hell Productions, L.L.C." The business, which promotes the idea of enduring "hell on earth" as a worthwhile alternative to suicide, was intended to combine Kalman's personal philosophy with a pithy turn of phrase promoting his irreverently secular, worldly, and non-theistic brand. The state of Pennsylvania, however, challenged the business's moniker on the grounds of blasphemy, while allowing other businesses, such as Butt Beer, the Satan Management Corp., Devil Media, Hell Razor Records, Hell Mountain Farm, and Hell's Half-Acre Lake Volunteer Fire Co.

It seems pathetic that Kalman was forced to provide an explanation to the media, as if the law is not already a clear constitutional violation. Nathan Gorenstein of Philly.com reports him as saying, "The only reason I filed the name is because in my movie the subject was always beating away depression and suicidal tendencies. The idea is that if life is hell, don't kill yourself, because you already own your own death". So not only is the furor over Kalman's reference to the Christian concept of eternal damnation highly questionable, but his heart seems to be in the right place (at least if one opposes suicide).

Illustrating the trend of governments losing sight of their original, fundamental principles, Kalman's attorney, Thomas H. Lee II, said, "I assumed that this was a statute that was left over from either the 19th or early 20th century. I was surprised to find that it dated only to 1977." Apparently, Gorenstein suggests, Pennsylvania legislators passed House Bill 371 in response to the opening of a gun-shop called "The God Damn Gun Shop" which enraged local ministers, pastors, and other clergy members. The bill states that corporate names "shall not contain words that constitute blasphemy, profane cursing or swearing, or profane the Lord's name." Now if this is not an example of religious bias, of government imposing religious principles on the public, and of the blatant violation of church-state separation, what is? It is truly a shocking and disheartening development for those who trust that religious neutrality and secular politics grows steadily stronger over time. It can really only be viewed as Christians with ruffled feathers trying to force the public to revere the principles and beliefs of the Christian religion.

Then, with the help of the ACLU, Kalman took the state to court. U.S. District Judge Michael M. Baylson ruled in Kalman's favor and declared the retrospective law unconstitutional over two years after Kalman took the state to court. Gorenstein reports Baylson as stating, "The court respects those for whom blasphemy is an important concept, and emphasizes that nothing in this opinion impacts their belief", but that the law as written "impermissibly entangles [state employees] with religion by requiring them, at their own discretion, to make standardless determinations as to what constitutes blasphemy, profane cursing or swearing, or what profanes the Lord's name, based on nothing but their own religious beliefs". Thus far the state has not appealed Baylson's decision; however, Pennsylvania's senior deputy attorney and attorneys with the corporations office are giving it closer scrutiny, and it does allow the state to attempt imposing a ban on certain vulgarities (possibly violating free speech protections in turn). Meanwhile, Kalman once again enjoys the right to use his business name of choice without the government dictating it on the grounds of religious scruples.

As an interfaith, universal church that supports religious neutrality in all government operations, Universal Life Church Monastery stands by Judge Baylson's decision. Undoubtedly, there are myriad other states with countless other First Amendment violations which keep organizations such as the ACLU, and the ULC Monastery blog, busy, so keep checking back often to read about more cases involving religion in government.