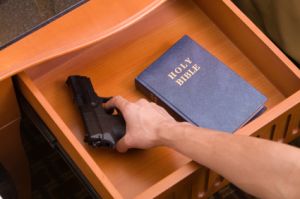 A federal investigation into a possible anti-abortion conspiracy has been undertaken in the United States a year and a half after the murder of an abortion provider in Kansas City. The FBI has focussed in particular on an at-home Bible-study group regularly attended by the doctor's murderer, questioning study group members who were acquainted with him. While group members maintain there was no conspiracy among the killer and other members, pro-choice activists have urged the U.S. government to keep a close eye on anti-abortion plots among religious extremists.

The murder happened in May, 2009, when abortion provider George Tiller was shot to death in the foyer of his church while performing his duty as an usher. The courts eventually convicted Scott Roeder of first-degree murder in the case, sentencing him to life in prison with no chance of parole for fifty years.

Eighteen months later, investigators began questioning members of Roeder's Messianic Jewish Bible-study group for signs of collusion and indications of an anti-abortion network. One group member, attorney David Lloyd, suggested the questioning was inappropriate: "I think they're just barking up the wrong tree," he said, according to Judy L. Thomas of McClatchy Newspapers. "None of us were involved in any kind of vast conspiracy or whatever it is they're looking for." In addition, two of Roeder's former roommates and several other study group members testified in court in September, and one of the former roommates, who led the study group but remains anonymous, reported that authorities had interviewed him at least nine times. He, too, maintains that there was no religiously-motivated anti-abortion conspiracy that justified violence against providers: "There wasn't any conspiracy within the Bible-study group," Thomas reports him as saying. "We were not part of this pro-life movement. We were never involved in that."

Whether or not the members of Roeder's Bible-study group were in fact involved in a conspiracy against Tiller, pro-choice advocates have reminded the public of the threat of religiously-motivated violence, and have urged the Justice Department to investigate possible cases of plots against doctors and clinics. In North Carolina, a man by the name of Justin Carl Moose was accused of distributing information on how to build bombs to a person he thought was going to blow up an abortion clinic in that state. The person ended up being a confidential informant and reported Moose's scheme to the authorities. Beforehand, however, Moose revealed to the informant that he belonged to the Army of God, a fundamentalist, right-wing religious group associated with underground anti-abortion terrorist networking. Moose has since signed a plea bargain with prosecutors on the charges. For abortion rights advocates, such cases simply serve to validate fears of anti-abortion terrorist networking, and the need to remain vigilant in searching out and extirpating violent religious extremists.

The fears of pro-choice advocates do seem legitimate. Whether or not Roeder's Bible-study group did indeed play a role in Tiller's murder, groups such as the Army of God do seem to indicate a penchant for religious terrorism. Anti-abortion extremists might attempt to form a utilitarian argument, stating, "By killing this one human life, we are saving many, many more". Of course, pro-choice activists might counter this by stating, "There is a critical distinction between a born and unborn human being the former is outside the woman's body, while the latter is not, therefore the woman's direct experience must be considered". In addition, one might argue that even if abortion w_ere_ immoral, there might be more peaceful, diplomatic means of preventing all those deaths than simply murdering the murderer, thus ensuring that everybody survives in the end. But that still assumes that abortion is immoral, and that controlling women's reproduction is moral.

At any rate, it will be interesting to see whether or not Roeder did have any help carrying out his murder of Tiller, and exactly how members of his Bible-study group may have played a part in nurturing Roeder's zeal and orchestrating the crime. At the end of the day, it did not do much to help Roeder, who is facing life in prison, and it certainly will not help paint a rosier picture of at-home Biblical devotions, but, then, perhaps Roeder sees himself as a martyr for Christ. Perhaps most sad and ironic of all is the fact that one follower of Christ was murdered by another purported follower of Christ, all based on a difference of opinion on whether women should be allowed to terminate their pregnancies.

Let us know your thoughts. Do you think underground religious terrorist networks are a problem in the United States?