As summer winds down and the leaves begin to turn color, that means one thing for many Americans: football season is starting. But for a now-infamous Kentucky preacher, it means something else entirely: more people going to Hell.

Baptist Preacher Ernie Spence was walking by an athletic field on a recent Sunday afternoon and was shocked to discover a youth football game underway. So disgusted was Spence that these kids were not in church, he picked up his cell phone and began filming a wild rant about how football will be the downfall of our God-fearing republic:

"I see what's wrong with America today," declared Spence. "Whenever your children have got more emphasis on what's going on in the football field than they do the house of God, and people jumpin' and cheerin' up and carryin' on like a bunch of banshee Indians over a kid just running and catching a ball. That's pure ignorance! Pure ignorance!' When these children are burning in Hell, how do you think you gonna feel? But, oh boy, junior can catch a ball, and junior could run. Junior runs straight to hell and you don't care."

He then railed against cheerleaders, equating the young girls at the game (who witnesses report were dressed modestly in shorts and T-shirts) to full-blown sex workers. "You think it's something your little girl can dress up like a prostitute? That's perversion out there whenever they shake their pompoms and shout and cheer and stuff. You need to get them in the house of God, friend," he said.

Needless to say, the video didn't get the positive reception Spence was expecting. The zealous preacher soon decided to delete it, but not before someone else was able to record a copy and repost it:

A parent of one of the cheerleaders at the game was offended by the comments, and contacted Spence directly. "My daughter was cheering at that game and I take that very personal," wrote Mitchell Welty. "Next time I welcome you to find me or any other father in the stands and voice your opinion face to face."

When Spence insisted he was simply "spreading the Word of God" and invited the father to attend his church, Welty replied: "Honestly, it's people like yourself that has driven me and countless others from organized religion. I would be appalled, embarrassed and ashamed to sit and listen to you give a sermon." 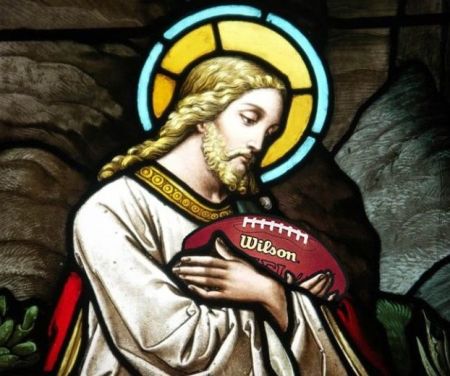 Is Football Our New Religion?

However extreme his rant, the Kentucky preacher has raised an interesting question: does America's religious-like obsession with football threaten the popularity of actual religion? It's not a far-fetched assumption.

On those gloomy Sundays during fall and winter, how many people would rather skip church and stay home to lie on the couch and watch football? A large segment of the population would probably rather dawn their favorite team jerseys, crack open an ice cold-beer, and sit back to watch the game. Perhaps understandably, the thought of having to get all dressed up to sit in a stuffy church and have some preacher ramble on about the many different ways to mess up in God's eyes is nowhere near as appealing.

The Pigskin God, it must be said, welcomes all fans - black, white, gay, straight, blindly patriotic, and those dedicated to criminal justice reform. Football worship spans culture, class, and creed, encompassing a massive swath of the population. And, though disagreements persist outside the stadium, the Church of Football becomes all-accepting the moment the whistle blows. Can the same be said of traditional religion?