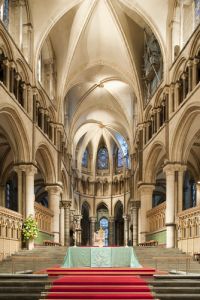 If the majority of decision-makers have their way, women may soon be allowed to become ordained bishops in the Church of England (CoE). The church's ecclesiastical governing body, the General Synod, recently voted to allow women bishops, although it will be at least two years before the measure can be passed. If it is passed, the church will join numerous other Anglican churches around the world which already allow the practice. For Universal Life Church ministers this should be a "no-brainer", since the full spiritual equality of male and female is a fundamental church teaching.

The recent vote rekindles an attempt at reform that was temporarily stymied late last year when a traditionalist minority blocked a vote to allow women bishops after a divisive ten-year debate. Like last time, an overwhelming majority of synod members decided to support the most recent measure, after several hours of debate in York. For Archbishop of Canterbury Justin Welby, who became the church's leader in January just after the vote and has attempted to modernize the church, the vote "affirms an inclusive approach that is consistent with our previous resolution: the commitment to ordaining women bishops on exactly the same basis as men, and the flourishing together of all parts of the Church". Legislation drafted by a committee will be reviewed later this year, but final approval is not likely to be given until early 2015.

Unlike the mother church in Britain, Anglican churches in numerous other nations, including the United States, Canada, Australia, and New Zealand, already allow women to become ordained ministers as well as bishops. Despite this progress in the developed world, less developed nations, where traditionalist sentiments about gender roles remain deeply ingrained, oppose any kind of female clergy whether bishops or ministers. Thus, although the majority of CoE leaders now support allowing women into the top tiers of leadership, barriers to women becoming ordained even at the lowest levels remain in many of the world's Anglican churches. 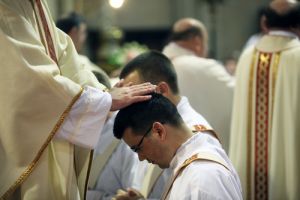 The Church of England's ban on women bishops stems from a longstanding tradition that only men may occupy the highest positions of power. Although the church allowed women to become priests in 1992, only bishops may ordain priests. And because only men may be bishops, only men may decide who becomes a priest. Hence, whether a given individual is considered qualified to teach or give church sermons is determined entirely by the views, beliefs, opinions, and experiences of men. It is perhaps ironic, then, that the current head of the CoE should be a female monarch a position of largely theoretical rather than actual power.

England's state church took a step forward by reversing last year's vote barring women bishops, but it remains to be seen whether a traditionalist minority will once again rear its head and block passage of the measure in 2015. Additionally, Anglican Church leaders in many of Britain's own former colonies remain strongly opposed to the idea, perhaps largely because of the colonial legacy left behind in many of these regions. If Universal Life Church ministers believe so strongly in the sacerdotal right to become a minister online, they should believe just as strongly in the right to become a minister or bishop regardless of sex. And so should the constituent

members of the Anglican Communion.