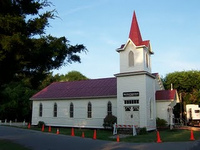 New wedding trends are constantly popping up these days, it seems, showing the continuing evolution of the wedding ceremony as young couples hunt out more and more novel ways of tying the knot. This metamorphosis of the traditional wedding took another creative turn recently when it was announced that a movie set would become a permanent wedding chapel in Tybee Island, just southeast of Savannah on the coast of the U.S. state of Georgia.

Originally, the Tybee Island Historical Society planned to move the structure, a donation from the Walt Disney Company, and bring it up to code, but high costs made this effort prohibitive. Now, as Jennifer Beale of The Coastal Source reports, the Society may have accrued enough funds to finish giving the church building a permanent site by next year. The Society does not have any mundane plans in mind for the structure, however, but intends to exploit its unique origin to boost the local tourist industry. As Beale reports, "[the chapel] could help the island become a wedding destination". While wedding tourism is probably not a new concept, as the less-than-reverent Las Vegas tradition of drive-through weddings shows, the use of movie sets to conduct weddings may very well become a unique and lucrative attraction for the small Tybee Island community.

With the Society's carefree attitude about the corporate nature of the donor and their sizing up of the structure for potential profits, the Tybee Island wedding chapel appears to be a cutting edge, unconventional innovation in the solemnization of wedding vows. If we look deeper, however, we must ask ourselves exactly how gutsy and progressive the Society's efforts to exploit Disney's donation are. Indeed, with its proposed renovations, which will include a separate "bride's room" and "groom's room", the site proves to be in many ways a continuation of the traditional wedding and its melodramatic irony, in which the sexes are separated and starkly contrasted with one another the groom in his sober black suit and the bride in her flamboyant white gown only to become suddenly joined at the altar by a highly "credentialed" minister who officiates over the proceedings in and old-time, vaguely Protestant setting.

The Society's new endeavor is certainly economically innovative: with its Disney movie set-turned-wedding chapel, the Society has shown little idealism regarding the high-minded loftiness of the traditional wedding ceremony and has instead incorporated it into the local tourist industry to produce profit. Despite this earthly pragmatism, the segregated set-up of the proposed renovation merely reinforces the mysterious, almost esoteric hiddenness of the opposite sex, while the idyllic Christian symbolism and architecture merely create a traditional, old-time American Protestant ambience. But, as the Society probably already knows, this seems to be what brings in the money, especially if one's customers hail from large swathes of the surrounding rural south.

If the Tybee Island Historical Society only partially bucks the trend in conventional wedding ceremonies, which organizations out there accomplish this task in its entirety? Dode Church proprietor Doug Chapman (discussed in a previous post below) may qualify, having integrated secular civil wedding ceremonies into a religious context and thus challenged ideas about what constitutes holy matrimony. However, as long as these supposed "wedding innovators" cling to symbols and traditions that ritually segregate the sexes, only to unite them, they merely reaffirm marriage as a miraculous compact between two eternally separate, dualistic, and opposing natures.

Assuming one of the missions of the universal church, such as ULC Monastery, is to challenge beliefs, perhaps we can begin this task by pressing wedding organizers to keep pushing the envelope and continue to re-invent the concept of marriage in order to reflect the more diverse reality of the larger population.