"You can't take Christ out of Christmas," as the saying goes.

Well, apparently, you can. And one Virginia school plans to do just that. Officials at Robious Middle School have banned all songs containing mentions of Jesus from the annual Christmas concert.

According to the school's choir director, the move was made in the spirit of sensitivity toward a more diverse student body. "We had a few students who weren't comfortable singing a piece I have done many times in the past, but it is of a sacred nature and does mention Jesus," the choir director wrote in an email exchange with concerned parent David Allen.

Allen countered that the changes to the winter concert program - while perhaps pro-diversity on their face seemed to be more aimed at knocking Christianity than anything else.

"It just seems like ... everywhere you look everyone's afraid of stepping on someone's toes or everything is being so sensitive," Allen later told reporters. "They were unable to [sing this song] because the word Jesus was in there and apparently someone assumed it was of a sacred nature. I'm trying to rationalize how you can encourage diversity and yet be exclusionary in one specific area," he remarked. 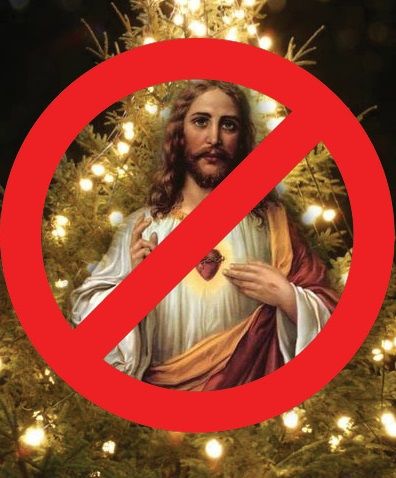 Unsurprisingly, the incident has provoked outrage in conservative religious circles, which are quick to respond to incidents involving anti-Christmas sentiment (whether perceived or real).

First Liberty Institute, an organization that focuses on issues of religious freedom, released a statement challenging the validity of the school's decision.

"Federal courts have upheld the constitutionality of public school holiday programs that include the use of religious music, art, or drama," a representative for the group wrote, "so long as the material is presented in an objective manner 'as a traditional part of the cultural and religious heritage of the particular holiday.'"

It's not the first time the so-called War on Christmas has made public schools its battleground. In December 2016, a Texas judge ordered a school to restore a "Charlie Brown Christmas" display after administrators had taken it down because it featured a Bible verse. Many complained about the decision, but the school ultimately relented and put the display back up.

Whether there really is a concerted effort to put a damper on Christmas is up for debate. Does demanding that government-operated entities like public schools refrain from promoting one religion over others really constitute a "war" on our nation's most popular winter holiday? That interpretation seems a bit sensationalistic.

However, it seems clear now that each new story about Christian symbols or references being banned from the public square will only serve to reinforce the belief held by conservative religious groups that their faith is under attack. After all, wars can't be fought without ammunition.

With that in mind, some people argue that the best strategy for putting this debate to rest might be simply to let Christians celebrate Jesus in the public domain (within reason, of course). After all, he is a historical figure whose birth is marked by a major holiday on our calendar. Similar to the pledge of allegiance, if students are uncomfortable taking part, give them an option to sit out or participate in an alternative activity.

But others are enraged by this idea, viewing it as a massive concession to faith groups intent on spreading their religious messages within society especially to young people. The United States is not a Christian country, critics insist, and as a matter of principle Jesus should be kept out of the classroom.