Turning the Traditional Wedding on Its Head 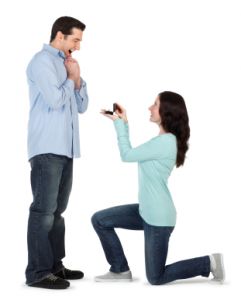 For many brides-and-grooms-to-be, the image of a young woman in a fluffy white dress being led by her father down the aisle to say "I do" to a stern man in a sober black suit has grown stale, and a trifle generic. Nowadays, more people want to have an alternative wedding ceremony which reflect their unique tastes as a couple, and sometimes this means reinventing age-old traditions and, quite literally, throwing a little dirt on things. Below are a few ideas that are catching the wedding industry by storm might inspire a more creative and personalized wedding for the reader.

A lot of trends have focussed on re-defining what it means to be a bride or groom, and one of these is the "little black bridesmaid's dress", something even a lot of ULC wedding officiants haven't seen at the altar yet. Traditionally, as we all know, black has been reserved for the groom and his men while the bride has donned and her bridesmaids, a vibrant blue, magenta, purple, or other similar color. But never black. Nowadays, though, bridesmaids and even brides themselves are wearing black because they like it, and it fits with the sartorial concept they had in mind (i.e. "Maybe I want my bridesmaids in black silk to resemble the night sky", or something similarly inspired). For modern couples, white is no longer a symbol of purity, and black opens up countless creative opportunities.

But the change in symbolism goes a little deeper than wearing black instead of white, and sex roles based on specious notions about intrinsic biological differences are beginning to crumble with the emergence of more egalitarian wedding and engagement trends like the "man-gagement" ring. Historically engagement rings symbolized a woman's bondage to a man, and while engagement rings no longer bear this connotation, it is a wonder why a symbol of engagement should grace the woman's finger, but not the man's. After all, they're both getting engaged, right? In response to consumers questioning this odd double standard, retailers are now selling engagement rings, albeit usually less ornate than the typical engagement ring, for grooms. Finally, we have arrived at the point where both women and men feel obliged to signal their commitment to another person.

Things like rings and dresses are just objects, though, and the wedding ritual itself is undergoing a transformation too. Fewer brides are comfortable with the idea of walking down the aisle clinging to their fathers' arms as if they are property being given away to the men who, in real life, they're marrying out of love and mutual respect. For this reason, more brides and grooms are choosing to walk down the aisle together. (As children, some us might have assumed that this is the way it had always been done, only to be surprised by the revelation that the groom had traditionally received the bride from her father.) As Lori Stephenson, co-founder of the wedding planning and design firm Lola Event Productions, tells Joe Mont of The Street, "They are coming together to the altar as equals and there is none of this old-fashioned idea of leaving your family". In addition, more women are proposing to their fiances, and more grooms have groomswomen while more brides have bridesmen. As marriage evolves into an equal economic partnership between two stable individuals, and as the larger society echoes this egalitarianism, the wedding ceremony is increasingly being re-conceived to reflect this social development. 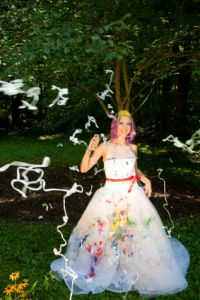 These are all somewhat solemn and philosophical considerations, but the modern wedding ceremony can be fun and quirky, too, reflecting the eccentricities of bride and groom, which is why photography shoots--those precious moments captured in time--are taking on a new twist, too. The pressure placed on brides to "play the part" and act like flawless beauty queens permanently embalmed in wedding photograph albums for decades to come can be truly nerve-wracking. As a way of alleviating some of this stress, and to create memories which reflect their off-the-wall side, brides are creating the perfect antithesis to the typical prim, proper, composed wedding photo shoot by deliberately . In some photo shoots, brides are dumping chocolate syrup on themselves, rolling around in the dirt, or running down the street in the rain--all in that expensive white, fluffy gown. (Usually the dresses go to the dry-cleaners afterward.) With the pressure to perform the part of the white-clad princess finally past her, the bride can now let loose and make a statement about who she really is (and still keep that heirloom dress, too).

And, of course, it has to be mentioned that more people are choosing get ordained online so that they can marry their loved ones. More and more, however, couples are double-checking with their local clerk to confirm the legal status of their wedding officiant and have low-key weddings ahead of time to avoid any surprises later on. It is a smart decision to make, but it's also a relief to know that wedding performed by ULC ministers are legal in always every jurisdiction in the U.S.

These ideas aren't for everyone--some people will still want to retain the more traditional elements of the wedding ceremony--but such quirky new customs wouldn't be catching on like wildfire if there weren't a substantial number of people who wanted to try them out. People are waiting until they're older to marry, women no longer belong to men, marriage requires less approval from society to be considered valid, and when people do marry they tend to do so after much waiting and deliberation, making for a big, painstakingly planned out affair. Consequently, marriage requires a little tweaking for the modern couple, and maybe a way for stressed-out brides to let off some steam. The Universal Life Church Monastery thinks it's a good thing that we're taking a critical look at what the wedding ceremony means for us today and redefining it, without any lingering sense of shame, to suit our modern-day needs and desires.

As a minister ordained online, or as an individual who recently married or hopes to do so in future, what do you think about the changing face of this cherished tradition? Do you like the creative, sometimes odd, ways in which weddings are being reinvented to reflect personal tastes and changing social attitudes?