What’s So Wrong With Halloween? 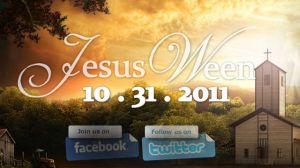 As Halloween approaches, many families are preparing for fun parties, trick-or-treating, apple-bobbing, and pumpkin-carving, but one pastor is waging a spiritual "battle" against the "evils" of the holiday through a process of Christianization. The new, Christian version of the co-opted holiday is known as "JesusWeen". But is Halloween _really_such an evil holiday? If we think hard and take a closer look at this mysterious time of year, we will see that the Christian campaign of fear against Halloween is unjustified. And we want to know what our ministers ordained online think.

The brainchild of JesusWeen (also known as "JesusWin"), is Pastor Paul Ade of Christ Embassy Church in Calgary. According to the Web site, JesusWeen is a non-profit organization dedicated to "helping people live better lives through the knowledge of our Lord and Saviour Jesus Christ". For "JesusWeeners", as the organization's members might affectionately be called, October 31st is "a day to expect a gift of salvation and re-think receiving Jesus", states the Web site. On that day, children are allowed to go from house to house asking for candy, but they must say "Jesus loves you!" instead of "Trick or treat!" and portray "positive" images like Superman or Spiderman instead of monsters. In addition, JesusWeen families would hand out Bibles instead of candy to trick-or-treaters visiting their home, or they could still hand out candy, but Ade recommends donating that money to an organization they support instead. 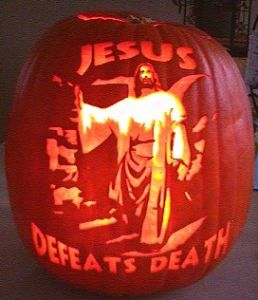 But this seemingly benign effort to preach the gospel to non-believers in a friendly way harbors a secretly critical attitude toward the Halloween tradition. This is evident in the words of Ade himself, who claims that Halloween is incompatible with Christianity: "I think it's an activity that doesn't have anything to do with Christians," he tells Seth Abramovitch of Gawker. "And I think many Christian families are not knowledgeable to what it's all about", he says, adding that "Halloween is not consistent with the Christian faith. Many people say they feel uncomfortable on that day. We think people should choose an alternative activity." (Certainly, a similar attitude of reproach and isolation is directed at people who choose to get ordained online.) Most North Americans are familiar with the traditions of both Christianity and Halloween, so what Ade seems to be saying is that Christianity is incompatible with activities which most people--including Christians--see as harmless, like trick-or-treating, bobbing for apples, etc. 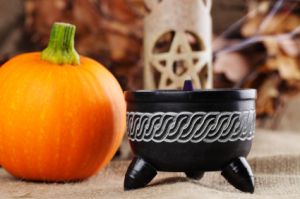 But are these activities really evil? To answer this question, it might help to compare Halloween with Hollywood. Our current conception of the holiday--from zombies, vampires, and werewolves to witches, demons, ghosts, and haunted houses--is influenced enormously by the engines of contemporary popular culture. Horror film studios cash in on seasonal features, and giant candy manufacturers, on the trick-or-treating sensation. Somehow, Halloween evolved into a corporate money-making machine. But it has far different origins. Halloween, or "All Hallow's Even", is the evening preceding the Christian holiday "All Saints Day", which was celebrated to commemorate all of the saints recognized by the Christian churches. This holiday was the Christianized version of a much more ancient pagan Celtic holiday called Samhain (pronounced "SOW-in"). Samhain was a fire festival, the last of three annual harvests, which marked a day when the veil between the mortal and spirit worlds became thinner, allowing spirits to walk among mortals and celebrants to communicate with the souls of deceased loved ones, as well as to seek the earth's protection through the long winter. Sometimes, tricksters would dress up as those spirits and go from household to household, asking for a treat lest they should pull a prank on the household, and families would leave food out to appease the fairies and earn their goodwill for the rest of the year. To ward off more mischievous spirits, families would carve a foreboding face into a turnip and use it as a lantern. But the Celts did not believe in Satan or demons, and the fairies they believed in were morally very similar to humans--imperfect--so it makes little sense to label Samhain as "satanic" or "demonic". Thus, it is important to distinguish between the historical and commercialized versions of Halloween, and not to blame the former for the crass horror-imagery of the latter, making money as it does off people's fears.

But it isn't enough just to question the way Hollywood has dominated and distorted our perception of Halloween; we ULC wedding officiants also need to question how much the past informs the present. To say that contemporary Halloween activities are evil because they derive from evil activities is a genetic fallacy. A thing is not good or bad because of its original meaning and context; it is good or bad because of its current meaning and context. Children dressed as witches, ghosts, and vampires in contemporary Halloween festivities are a pale shadow of the holiday's earliest tricksters (if indeed such tricksters were malevolent to begin with). Indeed, the sight of such children is so trite and adorable as to be virtually devoid of any trace of evil origin. So, one wonder what threat JesusWeen followers, or anybody else for that matter, see in a child in a mass-manufactured witch's hat and poorly-applied make-up from the local pharmacy. It turns out to be just another harmless _frisson_of unearthly mystery and wonder about the supernatural world.

Last but perhaps most importantly, the assumption that Halloween is rooted in evil and barbaric customs is perhaps the greatest motivator for movements like JesusWeen, yet similar customs are found in the beliefs of JesusWeeners themselves. It is true that in ancient times the Celts slaughtered animals during festivals like Samhain in order to propitiate the gods and ensure survival through the winter; experts are much more divided, though, on whether they routinely practiced human sacrifice. However, the Judeo-Christian faith tradition requires human and animal sacrifice, too. Judaism required the ancient Hebrews to slaughter animals to propitiate God and be redeemed, while Christianity went a step further and required humans to accept a human blood-sacrifice (the crucifixion of Jesus) to propitiate God and be redeemed. These rituals hardly sound less barbaric than those of the ancient Celts; in fact, if anything, the Christian one sounds even more barbaric since we know that it did require a human sacrifice. Meanwhile, modern pagans require no sacrifice whatsoever to propitiate their gods. So it is perhaps ironic that JesusWeeners should criticize the barbarism of Halloween, but not that of their own religion. One would think that if anything perverts or corrupts a child with its evil, it is the celebration of human sacrifice for the purpose of redemption.

To summarize, movements like JesusWeen are intended to co-opt Halloween and overshadow its supposedly malevolent origins with the celebration of life and goodness. There are several reasons why this is misguided. First, much of the imagery attributed to Halloween has more to do with concepts popularized by the media than with the original holiday itself; second, even if Halloween did have some unsavory elements, contemporary festivities are merely a pale, harmless reflection of these; and, third, the Judeo-Christian tradition recognizes human and animal sacrifice too, so if Christians are to criticize Halloween for its basis in this practice, it is only fair for them to do the same with their own religion. We see Halloween as evil because it is shrouded in mystery, but that view merely reflects a fear of the unknown, not of any actual evil; there is little, if any, intrinsic "evil" in Halloween for us to conquer, and only mysteries for us to explore. So, at this time of year, it would behove us as nondenominational priests and ministers to become better acquainted with the actual origins and customs of Halloween and reflect on what it means for us in modern-day life.

Learn more about what neopagans, Wiccans, and other followers of earth-based religions actually believe by visiting the Universal Life Church Monastery's Guide to Divinity.