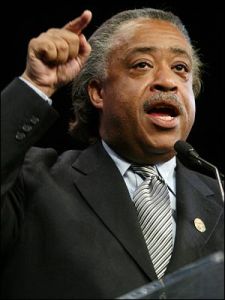 Young black Americans have been disenfranchised by the negative influence of a pervasive thug culture, argues civil rights activist Rev. Al Sharpton. In a sermon at a Protestant church in the American south, the reverend called on young black men to take more personal responsibility, as well as to seek divine intervention, in order to improve their lives. The speech reflects the views of many blacks who see younger generations as immersed in a self-defeating culture of violence and aggression.

The 50-minute sermon took place Tuesday night at Union Baptist Church in the U.S. state of North Carolina, before a congregation of 2,500 worshippers.

Sharpton, president of the National Action Network and 2004 Democratic presidential candidate, directed criticism at the way black people have raised their children, attributing many of the social ills that young blacks and African Americans experience to their upbringing. The reverend pointed out the irony that the first mixed-race president of the United States was elected largely by young black people who suffer from aimlessness and lack a plan for their lives. It is this lack of direction that "is crippling our children", reported John Hinton of the Winston-Salem Journal, quoting the reverend.

This aimlessness, and the violence, frustration, and indolence that it engenders, can be attributed to the pervasiveness of rap music and hip-hop culture in the lives of black youths, continued the Reverend. "Too many parents", Hinton paraphrases him as saying, "allow their children to be influenced by a culture of rap music, gangs, drugs and decadence." He added that "too many rap artists use racial slurs about blacks in their music", pointing out the word nigger is not always used in a tongue-in-cheek, empowering way, but also in a despairing, self-degrading way; he also criticized how rappers "refer to black woman as prostitutes", pointing out the rampant misogyny and alpha-male machismo encouraged by the music.

Sharpton also compared black youth culture in America today with black youth culture in America when he was growing up, criticizing the cynical mindset and self-defeating attitude of many young people in the community. Things were much different when he was young, he argues: "[w]e were taught pride. We were down, but we were not cursing out our grandmothers. You don't celebrate being down." Moreover, he said, young people should stop finding excuses in low self-esteem, bad drug habits, and bad relationships, and they should take responsibility for their own success: "Even if you are not responsible for being down, you are responsible for getting up. Everyone was born to serve some purpose", he said, suggesting that young blacks keep themselves oppressed when in fact they have the opportunity to liberate themselves.

Perhaps the central message of the sermon, along with that of taking personal responsibility, was one of divine entreaty: the reverend emphasized the importance of invoking the aid of God through prayer and meditation in order to redress past crimes, regain a sense of purpose in life, and achieve the equality, respect, and dignity which they deserve. "A delayed decision is not decision at all", Hinton quotes him as saying. "You will never be what you were born to be until you say, 'I want God's help right now.'"

Sharpton's words might seem controversial: while some may view his message as common sense and good advice, it may also strike a nerve in young blacks who have found a place in the hip-hop community. At the end of the day, though, the reverend stands up for principles most of us would also stand up for: self-respect, respect for women, equality, personal empowerment, and a sense of wholeness and purpose in life.

We are always happy to hear the thoughts of our ordained ministers. By criticizing "thug" culture and hip-hop music, is Sharpton attacking a valid facet of black culture, or a violent and harmful form of self-imposed oppression? Let us know what you think. (Feel free to read more on the subject by visiting our blog post on Bill Cosby's criticism of African American Vernacular English.)