You may remember Kenny Kramer, the real-life inspiration behind Seinfeld character Kosmo Kramer who decided to get ordained online and become a minister in the Universal Life Church. The quirky comedian, who leads tours of real New York locations featured in the long-running series, recently performed his first ULC wedding, taking full advantage of his reputation as a jokester. Although traditionalists may scoff at his approach, it does seem to serves the needs of many modern-day couples.

Weddings with a Rib-tickling Twist 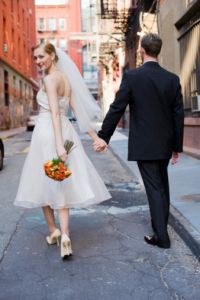 ern wedding ceremonies, the event took place not in a traditional house of worship, but in a secular entertainment venue. When Beth and Derek Iler looked up a non-traditional wedding officiant to make their wedding unique, they decided on the namesake of one of TV's most famous eccentrics. Soon after, the Ilers were tying the knot with a pony-tailed Kramer at the helm inside the Producer's Club in New York's Times Square.

The ceremony certainly pushed the envelope, as suggested by those in attendance. Kramer concluded the ceremony by announcing, "[i]f there's anyone here who feels this marriage shouldn't take place, let them speak now", but joked that anyone who does so can expect a good beating, causing the bride's parents to squirm. After several moments of silence he announced the Ilers as husband and wife, pointing out to the sound of nervous laughter that should they ever choose to divorce, he will perform their next weddings pro bono.

For traditionalists, ministers like Kramer make a mockery of marriage, but to contemporary couples like the Ilers they make it more memorable. Msgr. Bob Ritchie of St. Patrick's Cathedral in New York has said of online ordination, "I don't think it's a good idea", and "[i]t bothers me in the sense that I think that it's not taking marriage seriously". But Beth Iler feels that "[t]raditional ceremonies are pretty monotonous", while ULC minister Benjamin Oliver (founder of Dudeism) has said he wants to belong to a church which reflects his philosophy.

While traditionalists critique online ordination for compromising the integrity of marriage, people like Kramer and the Ilers see it as preserving the relevance of marriage. If you are more likely to remember a fun, light-hearted ceremony, and if it makes you happier, isn't that what really counts?