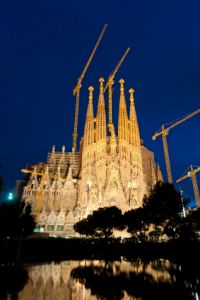 In an attempt to bring traditional Roman Catholic values back to an increasingly progressive Spain, Pope Benedict XVI visited the country's centuries-old pilgrimage site of Santiago de Compostela, where he criticized the growing "anti-church" sentiment of the Spanish people and compared it with the anti-church violence of Spain's civil war of the 1930s. Although the Pontiff was met by cheering crowds, this was offset by protests bearing a strong anti-Catholic sentiment. The visit highlights the increasingly weak grip of the Church on one of its traditional strongholds.

Pope Benedict has made efforts to combat what he sees as a disturbing wave of antipathy towards the Universal Church of Rome, and he voiced his concerns to the crowd upon his arrival. According to Nicole Winfield of the Associated Press, he told journalists en route to Santiago where he met with Crown Prince Felipe and Princess Letizia that he had set up a special office within the Vatican to combat increasing secularization worldwide, with special emphasis on the traditionally Catholic Spain. Winfield quotes the Pontiff as saying, "In Spain, a strong, aggressive laicity, an anti-clericalism, a secularization has been born as we experienced in the 1930's", adding, "For the future of the faith, it is this meeting not a confrontation but a meeting between faith and laicity, which has a central point in Spanish culture". The pope reminded those he greeted upon arrival that Pope John Paul II had issued a similar warning upon his visit to the site in 1982, describing his hope of seeing "[a] Spain and Europe concerned not only with people's material needs but also with their moral and social, spiritual and religious needs, since all these are genuine requirements of our common humanity".

After his visit to Santiago, on the country's wet and foggy northwestern coast, Benedict made an appearance in Barcelona, in the Mediterranean coastal region of Catalonia, where about two hundred gay, lesbian, and bisexual citizens jeered and staged a "kiss-in" protest on the street as the head of the Church passed by in his bulletproof popemobile on his way to celebrate Mass at the city's famed basilica, La Sagrada Familia. Despite their efforts, the protesters were outnumbered by throngs of supportive Catholics. Once inside the church, Benedict focused his censure at those laws which he sees as anti-Catholic particularly those granting easier access to abortion and allowing same-sex marriage.

For the Vatican, Spain is essentially a vital organ in the church's global "empire", and the current government threatens to undermine the country's traditional loyalty. Since its return to democracy after the death of the fascist dictator Francisco Franco in 1975, Spain has become one of Europe's most economically prosperous and socially progressive countries. Under Prime Minister José Luis Rodríguez Zapatero's socialist government, the country has allowed access to abortion, fast-track divorce, and same-sex marriage, in contravention of the official policy of the Vatican.

Dark storm-clouds seem to have followed the pope wherever he has travelled in his European junket. He was also met with protests during a recent visit to Britain, a country whose people have for centuries shown particular suspicion towards the Holy See. As he arrived at Holyroodhouse in Edinburgh to meet the Queen, he received the usual swarm of adorers waving flags, but this, too, was offset by several contingents of protesters. As he spoke, he praised Britain for its role in defeating Hitler's allegedly "extremist atheism", and he noted the country's attempts to forge a modern, multicultural society, but qualified this statement with an admonishment against "aggressive forms of secularism" which threaten to derail more traditional values and morals.

Perhaps most ironic about the Pontiff's statements is the fact that the actions of protesters have not appeared in the least bit violent or in any way reminiscent of the fascist take-over of Spain in the 1930s. The Barcelona kiss-in apparently succeeded as a peaceful, yet deliberately calculated and irreverent, form of resistance to what a growing number of modern Spaniards view as an oppressive, ironclad regime which itself has had Europe in its grip for centuries, especially in the form of such brutal tribunals as the Spanish Inquisition. For many young, modern Europeans, this is not so much different from the military dictatorships which characterized Europe in the twentieth century.

It will be interesting to observe how the attitudes of Europeans toward the Roman Catholic Church change in the coming years, and whether the Vatican succeeds in persuading people to return to more traditional Catholic values, or in turning them away through its refusal to adapt to modern society. We would like to know your thoughts on the matter. Is the Church as strong and venerable an institution as ever, or is it gradually losing ground in an increasingly secular Europe?