The Supreme Court's recent Masterpiece Cakeshop ruling brought cheers from religious freedom groups and groans from LGBT rights organizations. But in an unlikely turn of events, the majority of public attention following the decision was not concentrated on Washington D.C., where the court ruling was handed down, or on Colorado, where the baker originally took his stand against gay marriage.

Instead, of all places, the world turned its eyes to a small town in Eastern Tennessee.

There, on the door of a local hardware store, is a handwritten sign that reads "No Gays Allowed." After a photo of the sign was posted online, it quickly became the top trending topic on Twitter, and was seen by millions around the globe. The sign generated widespread outrage and was bemoaned as an indication that bigotry and intolerance are being normalized in America.

The store in question, Amyx Hardware, belongs to Grainger County resident Jeff Amyx. As it turns out, he initially posted the controversial sign back in 2015 after the Supreme Court legalized same-sex marriage nationwide. Amyx, a devout Baptist, felt that gay and lesbian couples - whose very existence ran counter to his religious beliefs - needed to know where he stood:

Following backlash from the LGBT community, he temporarily posted a vague message that read "We reserve the right to refuse service to anyone who would violate our rights of freedom of speech & freedom of religion." However, the original sign never came down, and remains prominently displayed to this day.

Encouraged by the Court

Despite numerous court rulings expanding LGBT rights in recent years, Jeff Amyx has held onto his rigid views and remains undeterred as a quick visit to his Twitter page will tell you:


Homosexuality is a choice not something you're born with. For God didn't make sodomites man did.

Although (in his mind) God has always been on his side, it was gratifying to get some affirmation from the nation's highest court. But in an interview with a local news outlet after the Masterpiece Ruling, Amyx acknowledged the fight won't be an easy one: 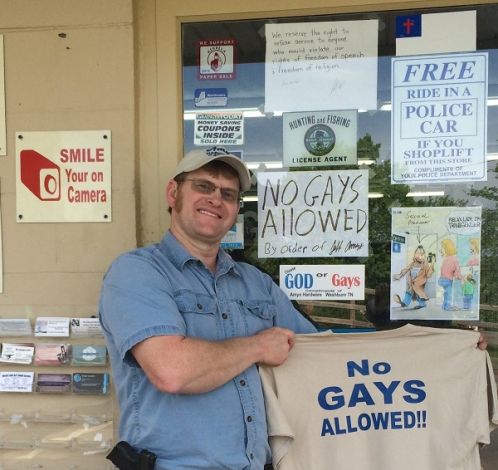 "Christianity is under attack," he said. "This is a great win, don't get me wrong, but this is not the end, this is just the beginning. Right now, we're seeing a ray of sunshine. This is 'happy days' for Christians all over America, but dark days will come."

If Jeff Amyx's reaction is at all indicative of homophobes at large, we may see even more instances of discrimination in the near future. However, while the recent verdict may have given a boost to those who practice intolerance under the guise of religion, legally speaking not much has changed yet.

By issuing a narrow ruling, the Supreme Court sidestepped the central question of whether opponents of same-sex marriage (such as florists and photographers) should be allowed to refuse commercial wedding services to gay couples.

Given the contentious nature of this issue and the fact that similar cases are currently making their way through the court system it seems inevitable that the Court will be forced to confront the question eventually.