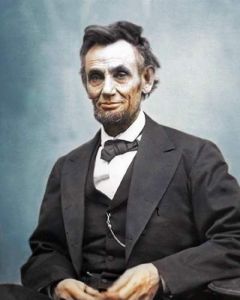 Compared with people in other industrialized countries, Americans tend to be highly traditional and religious. They like to think of their early leaders as sharing exactly the same beliefs and sentiments as they, but this assumption is not always backed up by the evidence. This fact is only made clearer by the recent discovery of a letter shedding light on former U.S. president Abraham Lincoln's personal views on faith and religion. As it turns out, the man who helped free the slaves may have had a more complex and skeptical attitude towards religion than even many present-day American political leaders.

The 19th-century letter, which was acquired recently from an old, private collection and went up for sale for $35,000 was written by William Herndon, Lincoln's close friend and law partner in the years before his presidency. In the letter, written and signed 4 February 1866 and addressed to Edward McPherson, Clerk of the U.S. House of Representatives, Herndon said, "Mr. Lincoln's religion is too well known to me to allow of even a shadow of a doubt; he is or was a Theist & a Rationalist, denying all extraordinary -- supernatural inspiration or revelation", adding that, at one point, Lincoln "was an elevated Pantheist, doubting the immortality of the soul as the Christian world understands that term". Emily Sohn of Discovery News reports historian Ronald White as saying that Herndon wanted to set the record straight for biographers who would attempt to Christianize Lincoln.

As Sohn explains, the newly-discovered letter does not paint a picture of either a categorically atheistic or Christian Lincoln, but it does corroborate other descriptions Herndon gave of a president who treated religion with a critical, skeptical mind. In addition to Herndon's letter, Lincoln's former secretary, John Hay, discovered an untitled and undated letter Lincoln's death which, according to Sohn, "both questioned" the presence of God, a creator, or a higher power "in the midst of the Civil War and offered affirmation that God was somehow a silent actor in the war". The letter was given the title Meditations on Divine Will by Hay. Although Lincoln was born and raised a Baptist, Sohn explains, he left organized religion as an adult and never joined a congregation, but she describes White as saying Lincoln went on a "faith journey" that deepened and matured during his presidency.

Such insight and discoveries may reveal a portrait of a man who neither blindly embraced religious faith traditions, nor rejected them altogether. It seems that Lincoln was a thinker and a critic of religious beliefs, but some of these he may have secretly struggled to integrate into his nondenominational philosophy. Nowadays we might call him a deist or a humanist, and it seems highly unlikely that he would mirror the right-wing, fundamentalist zeal of present-day U.S. politicians who feel the need to prove their Christian faith to the public. Indeed, if the 16th president were alive today, conservatives might view him as highly subversive and eccentric, as one of those "experts" or "intellectuals" they love to deride as "un-American", or something like that a highly ironic and misplaced accusation given that no principle is more democratic than free thought and fair, open debate.

Surely, the more we delve into the minds of leaders past, the more we will be surprised at what they tell us about ourselves in the modern-day.