Pastor Rob Bell of the Mars Hill megachurch in Michigan has asked a question that has traditional evangelicals fuming: does hell really exist? In his new book, titled Love Wins: A Book about Heaven, Hell, and the Fate of Every Person, Bell challenges the unwavering conviction that God has created a special place of eternal torment for non-Christians to go after death. The question he raises forces the reader to ask herself, if there is a God, what is his nature, and would such a being torment me for eternity if I do not believe that Jesus is my savior?

As Jon Meacham of Time reports, Bell decided to hold an art exhibition at his church, a nontraditional congregation that focuses on discussion rather than dogma. The art exhibit was about the search for peace in a world of turmoil, and was part of an entire series on peacemaking. As a part of the exhibit, one work included a quotation by Mohandas Gandhi. During the exhibition, Meacham reports, Bell noticed a note attached to the work in response to the quotation which read, "Reality Check: He's in hell." Meacham says Bell was immediately struck with the following thoughts:

We have confirmation of this?

And that somebody decided to take on the responsibility of letting the rest of us know?

It was this rock-hard conviction that Gandhi went to hell because he was a non-Christian that inspired Bell to take on the task of writing his iconoclastic work on the existence of hell. It is an especially troublesome assertion for conservative Christian evangelicals, who base their claims of Christian exceptionalism on an important passage from the Gospel of John which reads that "eternal life" will be promised to "whosoever believeth in Him [Jesus]". Evangelicals usually interpret this passage as meaning that a person must believe that God became a man and had himself sacrificed to pay for human sin, so that any person who accepts the sacrifice will go to heaven.

In light of this interpretation, evangelicals have fired back at Bell's claims about salvation. One of these people is R. Albert Mohler Jr., president of the Southern Baptist Theological Seminary. According to Meacham, Mohler calls Bell's book "theologically disastrous", arguing that people "should be concerned when a matter of theological importance is played with in a subversive way". (Meacham also reports that a pastor was fired from his North Carolina church for endorsing the book.) Mohler adds, "[w]hen you adopt universalism and erase the distinction between the church and the world you don't need the church, and you don't need Christ, and you don't need the cross. This is the tragedy of nonjudgmental mainline liberalism, and it's Rob Bell's tragedy in this book too". Reflecting the conventional Christian dogma, Mohler suggests that a person must accept the blood-sacrifice of the Christ-avatar to gain heaven.

Bell offers his own meditation on this most ancient (or is it so ancient?) doctrine. As Meacham explains, Bell believes in the atonement of Christ but is unsure whether those who do not believe it are redeemed. In other words, perhaps acceptance of Christ's atonement is not the only test for salvation. He quotes Bell as saying, "I have long wondered if there is a massive shift coming in what it means to be a Christian", adding, "[s]omething new is in the air". Ultimately, Meacham points out, Bell's concern is about theological rigorism and religious exclusivity, which he views as a dangerous thing. We should, he suggests, accept the mystery surrounding death, salvation, and other eschatological matters, and question with a healthy dose of reason the traditional Christian dogma. 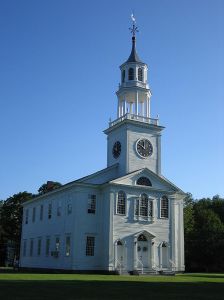 But if we do this, what does it bode for the Christian faith tradition? If we say the blood-sacrifice of Christ is unnecessary to redeem humankind, where does the Christian faith stand? What is left? We can see how rejecting the doctrines of grace, atonement, and redemption through the blood-sacrifice of the Christ-avatar could undermine the church. To challenge the doctrine that acceptance of Christ's sacrifice is necessary to enter heaven is to challenge the fundamental mission of the church to secure control over the population by promising them salvation. If salvation is no longer necessary through Christ, the Christian church has little, if any, leverage remaining. And this is a frightening thought for Christians in positions of power, for spreading a simple message of love is not enough to secure political and social domination.

But let's look briefly at the theology for ourselves. At the beating heart of the Judeo-Christian tradition is the assumption that humans must perform a blood-sacrifice to atone for their sins. No good deeds will substitute for this sacrifice. The Bronze-Age Hebrews achieved this by slaughtering animals; however, after God incarnated as Christ and had himself sacrificed, humans could accept this sacrifice as payment for their sins. Either way, however, blood must be drawn to appease God and avoid eternal torment in hell. (The earliest Hebrews may have performed their sacrifices merely to avoid punishment in the present world.)

Understandably, many take issue with this belief system. The critic would argue that a truly good, loving God or Supreme Being would never require us to butcher or torture another living being in order to appease him. That would be sadism. In addition, she would ask, why shouldn't humans be able to pay for their sins in good deeds rather than violence? Wouldn't God be pleased with acts of kindness rather than acts of violence? And, she would argue, even if they failed to do what they needed to do to pay for their sins, it would seem disproportionately cruel and ruthless to punish them for eternity, for the suffering caused by human imperfection pales in comparison to the suffering experienced in eternal torment.

One might surmise that these are exactly the questions Bell is asking.

For all we know Gandhi did not accept this sacrifice, therefore, according to the evangelicals, despite all his good deeds for humanity, God is roasting him in hell for ever. We would like to ask you your thoughts: do you really think this is fair?

You can learn more about Rob Bell and his works by visiting his Web site at http://www.robbell.com.