Regardless of their religious beliefs, people are worshiping more and more just not in the manner you might think. They don't worship by going to church, praying to God, or reading a religious text. They do it by opening Facebook.

As of this summer, the number of active users on Facebook has surpassed 2 billion, making it more popular than Islam (1.8 billion followers) and puts it hot on the heels of Christianity (2.3 billion followers). Going by the numbers, Facebook is now the second-largest religion in the world. 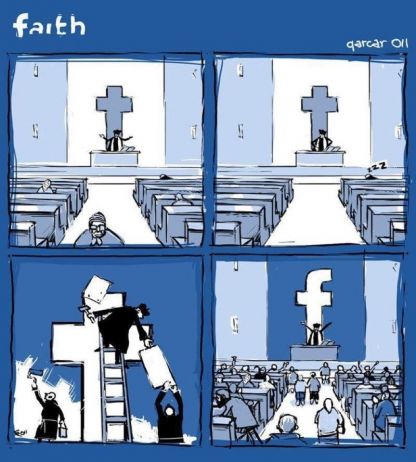 Although traditional religion remains important in the lives of many people, membership in organized faith groups is on the decline. All across America (as well as in other countries) churches are struggling to keep the pews full on Sundays. Studies show that more people than ever before claim no religious affiliation whatsoever. So, what's filling the void? Where are these Godless people turning? Well, they're on Facebook.

The social media giant has seen membership skyrocket over the past few years at a rate that would make any religion envious. Consider this, too: Facebook owns 3 of the 5 largest social media networks in the world (WhatsApp and Instagram, in addition to the Facebook platform). All told, their combined users total a quarter of the world's population.

The rampant growth of this new "congregation" has taken many people by surprise, and it's making traditional religious institutions a little worried.

Connecting with the Community, from the Couch

What are the larger implications of this "new religion"? Well for one, people suddenly have an alternative way to engage with their community. For many, church is as much a social event as a spiritual one. But why drag yourself to church on Sunday morning when you can chat with those same people online, all from the comfort of your couch?

But that's not all. There are countless religious Facebook pages which serve as 24-hour faith discussion forums. Plus, with the advent of Facebook Live and other video applications, some worship services are now live-streamed allowing people to watch at home on their devices. How can brick-and-mortar churches possibly compete with that kind of convenience? 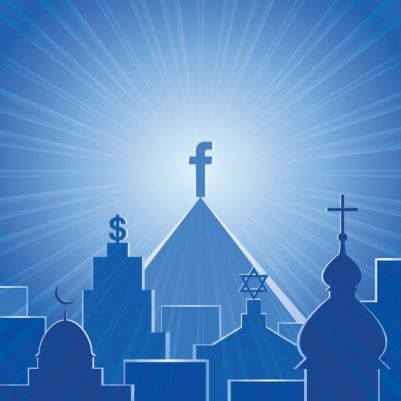 The Church of the Future

Think about it: people use Facebook to gather and offer comfort in the wake of a tragedy. They extend encouragement and well wishes to those in need. They wish each other happy birthday. All of this used to happen in person, in houses of worship. Increasingly, it's happening online.

Don't think for a second that any of this is accidental, either. Facebook founder Mark Zuckerberg recognizes the social media giant's potential to create successful virtual communities, and is actively pushing the company in that direction. Just look at their newest mission statement: "Bringing the world closer together." The goal couldn't be clearer.

So what will the consequences be? Could Facebook's rise result in the slow deterioration of physical faith communities around the globe? Is it possible that the church of the future will exist entirely online?

As the public millennials especially live more interconnected, technology-focused lives, it's a real possibility that the need for human interaction once served by churches and religion at large will be supplanted by social media.

Maybe you still attend church regularly and scoff at the notion of this ever changing. Just think for a second, though technology is only going to get better. Perhaps a live-streamed service doesn't interest you, but what will the next few years bring? What if you could put on a Virtual Reality (VR) headset in your living room and experience the church service as if you were in the front row?

That's not just a possibility, it's an inevitability. The technology is not far off. But here's the most interesting part: What company has the resources and incentive to develop, produce, and market such technology?

The church of the future may be coming faster than you think.