Free at Last: Immigrant Spends a Year Hiding From ICE in Church Basement

Countless people report being "saved" by Christ each year, but one Philadelphia man took the opportunity quite literally. When a deportation order was issued in his name, Javier Flores sought refuge from ICE agents in a local church. The pastor and congregation warmly embraced Flores, making a room for him in the basement of the church. That was nearly a year ago.

After months of uncertainty and anxious waiting, Flores received a waiver on his deportation order. Last week, he was finally able to leave the confines of the church for the first time in 11 months.

A stone's throw from the normal hustle and bustle of regular life, Javier spent his days stuck in a dimly lit church basement. His family would visit whenever they could, but those occasions were few and far between.

Reflecting on his time in isolation, Flores explains the challenges of taking shelter: "It's very difficult to see people walking outside with their families, with their children, and not being able to do that."

After receiving the long-awaited good news from his lawyer, Flores finally walked free. The embattled immigrant was met by his family on the front steps, and they received cheers from a small crowd gathered to witness the occasion.

Javier Flores is just one many immigrants living in the U.S. illegally who are feeling the squeeze of revamped immigration policies. Deeming these policies to be misguided, many houses of worship are fighting back. All across the country, churches are opening their doors to provide sanctuary to illegal immigrants facing deportation. Citing Christian ideals of being welcoming and showing kindness to all, scores of pastors have made it clear they intend to stand up against government immigration orders.

Dubbed "sanctuary churches", they operate by taking advantage of a caveat in Immigration and Customs Enforcement policy. Agents are instructed not to enter certain locations such as churches, schools and hospitals even if they are known to be harboring illegal immigrants.

That's how Javier Flores was able to avoid deportation. As long as he didn't leave the walls of the church, he essentially remained untouchable. 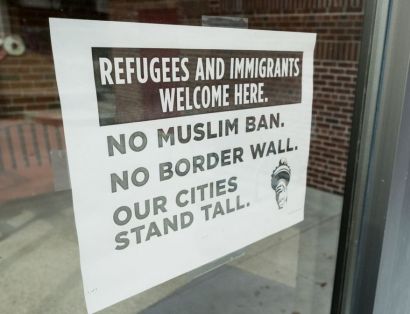 As you might imagine, Mr. Flores is far from the only immigrant seeking sanctuary. With an administration that appears serious about enforcing immigration laws, people who once felt safe without documentation are now on edge. Those with criminal backgrounds are at particular risk of being deported.

Enter the sanctuary churches. Some people see their actions as noble and just. By standing up to the government, they are protecting marginalized and vulnerable individuals who simply want to stay in the U.S. for a chance at a better life.

However, critics insist that the churches are effectively providing asylum to criminals, which is a crime in and of itself. Detractors call for any pastor who offers shelter to illegal immigrants to be prosecuted for obstructing justice.

So, what should be done?

Regardless of what the law says, one thing seems clear: this issue is a PR debacle-in-the-making. Uniformed agents breaking down church doors and putting people in handcuffs is unlikely to endear the government to its citizens. The White House appears to recognize this, which is probably why they've chosen not to crack down on sanctuary churches.

What do you think? Are churches right to be sheltering immigrants, or should they just stick to sermons?