I had always hoped that this land might become a safe and agreeable asylum to the virtuous and persecuted part of mankind, to whatever nation they might belong. George Washington

From the time of its founding, America has been a nation of immigrants. In fact, 7 of the 39 men who signed the U.S. Constitution were immigrants. The process of foreigners leaving their homelands and coming to the United States has played an important role in the country's growth and development into a world power. However, this phenomenon has also been a constant source of tension throughout history. Some people think America should welcome everyone who seeks a better life regardless of their race, language, nationality, or religion. Others believe that doing so will harm the fabric of American society, and we should be very selective about who is allowed to cross our borders.

It's no secret that this issue has gained a new significance in recent months. Officials estimate that there are about 11 million immigrants living in the United States illegally. With a new administration that appears to favor a hardline approach on immigration, these individuals are at risk of being deported. Some illegal immigrants, fearing deportation, have found a new ally: the church.

Meet Javier Flores, an illegal immigrant from Mexico living in the basement of a church. After receiving a deportation order from the federal government, he sought sanctuary at Arch Street United Methodist Church in Philadelphia. The government considers churches to be "sensitive locations" places where immigration laws cannot be enforced. To Flores' relief, Arch Street agreed to take him in. "Jesus said we are to provide hospitality to the stranger," explains the church's pastor, Rev. Robin Hynicka.

Mr. Flores, whose wife and two children come to visit him frequently, fears being separated from his family. He stays in the church at all times to avoid being apprehended and forced to leave the country. The accommodations are far from luxurious Flores sleeps on a cot in a small Sunday-school classroom. However, for now at least, he is safe from deportation. "What better work for the church to do," said Rev. Hynicka, "than to provide what we know God gives us, our heartfelt commitment to family, whether that family comes from Mexico, or from Philadelphia, or wherever.''

The Philadelphia church is just one of over 450 houses of worship across the United States that have joined the "Sanctuary Movement", an alliance of churches and faith communities pledging to offer sanctuary or other forms of assistance to people living in the country illegally. Some are simply offering financial aid, while others are taking a more active role. Notably, the Episcopal Diocese of Los Angeles has recently declared itself a "sanctuary diocese", calling for a "holy resistance" to mass deportation.

A similar movement back in the 1980s spurred the creation of an "underground railroad" of sorts to help move immigrants around and keep them safe from deportation. Church leaders say that if the promised crackdown occurs, they will consider reactivating this network. In the meantime, they remain on-guard and watchful. 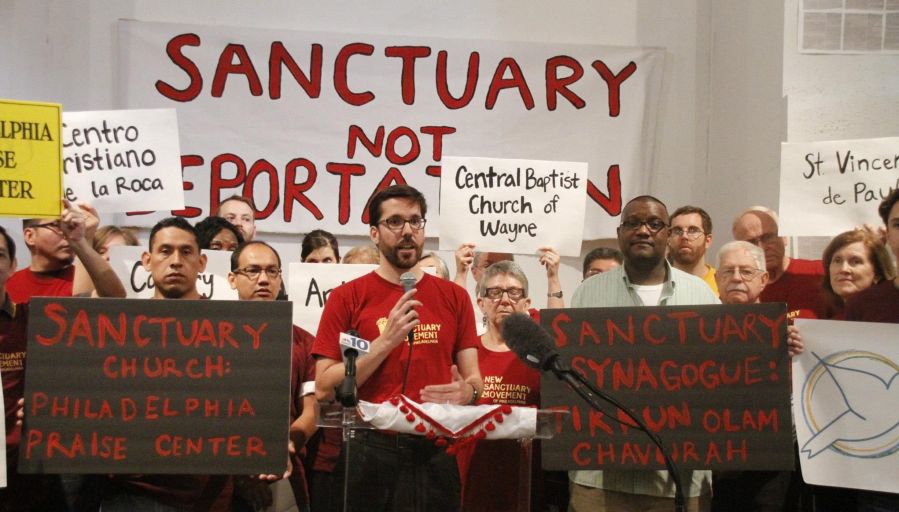 There is an important moral debate happening in the country right now. While the founding fathers may have intended for America to be a land of refuge for the poor and the persecuted, the world is also a much different place than it was back then. The question is: do we have an overarching moral obligation to accept immigrants to this country even those who did not arrive through the proper channels?

In engaging in such a debate, it's hard not to be reminded of the poem inscribed on the Statue of Liberty:

"Give me your tired, your poor,
Your huddled masses yearning to breathe free,
The wretched refuse of your teeming shore.
Send these, the homeless, tempest-tost to me,
I lift my lamp beside the golden door!"

Does America have a duty to provide sanctuary to the huddles masses of the world, or do we have bigger problems to deal with? What do you think of the Sanctuary Movement?