Corporate Creed: The Companies You Never Knew Were Deeply Religious

Chick-fil-A famously expressed opposition to gay marriage on religious grounds, creating a storm of controversy and sending people flocking to restaurant locations to either protest outside or show their support inside.

Craft giant Hobby Lobby refused to pay for employees' birth control due to the owner's religious convictions regarding the sanctity of human life. That case went all the way to the Supreme Court, garnering significant attention along the way.

But the list of companies built on a foundation of faith is much longer than just those two. Here are some popular brands with religious connections you might not have known about: 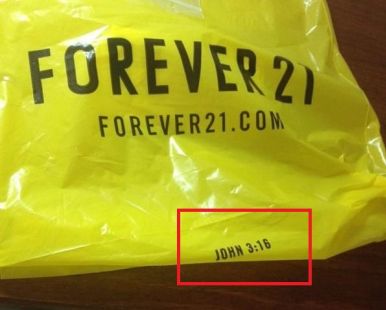 The popular clothing company has become a household name by catering to women of all ages through affordable pricing and trendy fashion design.

As it turns out, Forever 21 has deep roots in Christianity although you have to look closely to see it. Astute shoppers will notice that each shopping bag from the outfitter has the phrase "John 3:16" printed on the underside.

The founder of Forever 21, Do Won Chang, explains that he felt empowered by his faith and by God to print the message on his company's shopping bags: "The love he gave us, by giving us his only son, Jesus, was so unbelievable to me. I hoped others would learn of God's love. So that's why I put it there."

Forever 21 fashion designers regularly go on Christian missions all around the world, trips that are enthusiastically supported by ownership.

Marriott has over 550 locations around the world, and anyone who has stayed in a Marriott hotel room might have caught on to their religious leanings. As long as you checked in the drawer of the bedside nightstand, that is.

In lieu of a Bible, each Marriott hotel room comes with a Book of Mormon in the nightstand. The impetus? Founder John Willard Marriott was a devout Mormon.

Trijicon makes optical sighting equipment for firearms. They caught public attention back in 2010 after an ABC News investigation revealed that they place coded Bible verses on all their products.

Tacked on to the end of each serial number were shorthand versions of various Bible verses. For example, the popular ACOG scope was branded with the characters "JN8:12" -- a reference to John 8:12, which says: "When Jesus spoke again to the people, he said, 'I am the light of the world. Whoever follows me will never walk in darkness, but will have the light of life.'"

Things became problematic when it was revealed that Trijicon is a major supplier to the U.S. military. The company was subsequently forced to scrub the biblical serial numbers on all military products. However, the verses continues to appear on items they sell to regular consumers.

Perhaps the most surprising addition to this list is the well-known West Coast burger chain, In N' Out.

Some customers were shocked to learn that In N' Out has been printing Bible verses on their food packaging for years. You'd be forgiven for never noticing, however; the inscriptions are all in discreet places underneath cups, on the corners of burger pouches, etc: 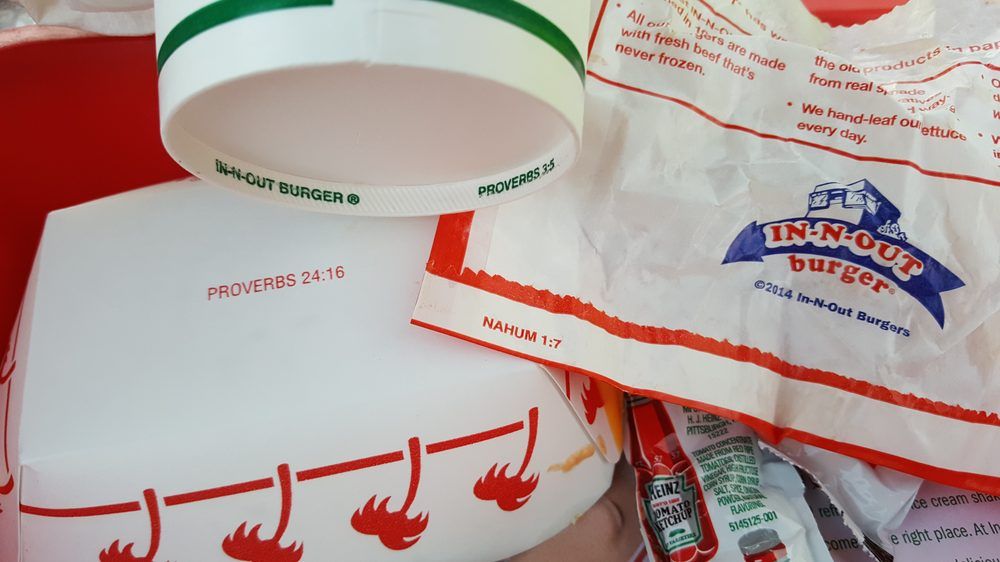 The iconic "Double-Double" burger has the inscription "Nahum 1:7" on the seam of every wrapper, while fry baskets have "Proverbs 24:16". Other common Bible verses found on In N' Out items include John 14:6, Revelation 3:20, and Proverbs 3:5.

Lynsi Snyder, the 3rd generation president of the family business, is a devout Christian and likens the subtle references to reminders that people can "find peace through religion".

Religious messages, particularly inscriptions found on products themselves, have been the source of controversy over the years. While some argue that this is just a harmless expression of religious values, others feel that subliminal religious messages are an inappropriate and sly method of influencing unsuspecting customers.

What do you think? Does religion have a place in the corporate world?

Were you surprised to see any of these companies on this list?