40% of Americans Say Invasion of Ukraine Sign of End Times

Are we in the end times? According to a new poll, nearly 40% of Americans think that biblical prophecy is being fulfilled by Russia's invasion of Ukraine, as well as the COVID-19 pandemic – pointing to Christ’s return any day now.

Are we really in the end of days?

The poll was conducted by The Joshua Fund, a Christian nonprofit that advocates for Israel. They asked a sampling of 1,000 adult Americans if they believe that the Russian invasion of Ukraine and the COVID-19 pandemic are signs of the end times. In the New Testament, Jesus speaks of both wars and plagues before His return.

The results were shocking, even to the Christian group that commissioned the poll.

39.8% of Americans surveyed agreed that “Russia’s invasion of Ukraine… is one of the signs that Jesus spoke of in the Bible when He warned that there would be ‘wars and rumors of wars’ in the ‘last days’ before His return.” 40.3% said they disagreed, and 19.9% said they were unsure.

Even more said that the “COVID pandemic… is one of the signs that Jesus spoke of in the Bible when He warned that there would be severe ‘plagues’ in the ‘last days’ before His return,” with over 40% of Americans agreeing.

Many evangelicals have been speculating that the Russian invasion of Ukraine is a sign of the biblical end of days since it began. Evangelicals were by far the most convinced religious group surveyed in the poll – over 70% of evangelicals agreed – and many evangelical leaders have suggested as much.

Famed evangelist and former host of The 700 Club Pat Robertson even came out of retirement to say that Putin’s Ukraine invasion was the first step of fulfilling the biblical prophecy of Armageddon.

Pat Robertson came out of retirement to claim that Putin "is being compelled by God" to invade Ukraine in preparation for a massive End Times invasion of Israel. pic.twitter.com/Pmwybf57Ay

But Pat Robertson’s not the only evangelical leader saying that we’re at the doorstep of the apocalypse. In fact, as the war in Ukraine continues to rage, it's become a common refrain from evangelical leaders.

Is This the End?

“I believe we’re living in the last days. I believe Christ could come back at any moment,” said another megachurch pastor, Greg Laurie of Harvest Christian Fellowship. “We are seeing more things happen in real time, closer together, as the scriptures said they would be,” he stated.

Some have even sought to quantify just how close we are to the end of days mathematically. A group called Rapture Ready has created its own "Rapture Index," which it describes as a “Dow Jones Industrial Average of end time activity.” The Rapture Index ranks 45 different categories – everything from moral standards to occultism to volcanoes – to measure how close we are to the end times.

With a current rapture index of 187, we are officially in “fasten your seatbelts” territory. 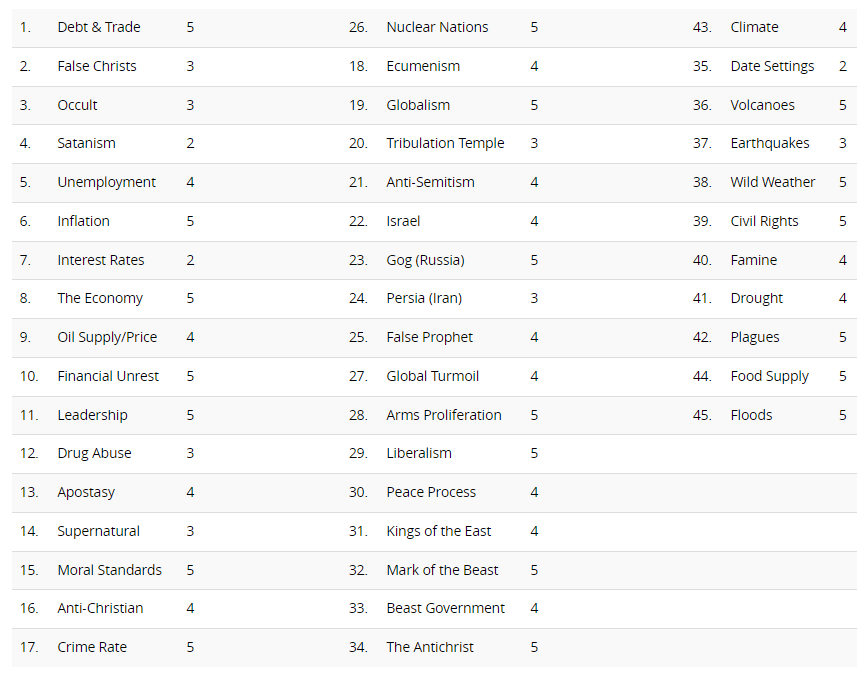 Still, not all evangelicals agree. Russell Moore, a theologian at the publication Christianity Today says that trying to connect problems on earth with the return of Jesus is “not consistent with the Bible and it’s harmful to the witness of the church,” pointing out that we’ve outlived plenty of recent end times speculations.

Pat Robertson himself famously speculated that the world would end in 1982, then in 2007, and now in 2022. The fact that we're all still here should be an encouraging sign, surely.

Still, a world-changing pandemic and the largest European land war since World War II occurring back to back is certainly a little eerie.

What do you think? Are we truly in the end of times? Are COVID and the Ukraine invasion signs of biblical prophecy, or just signs of a world in a state of upheaval?