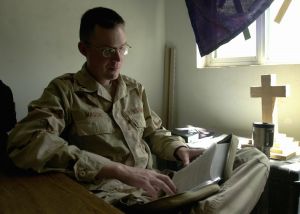 U.S. military chaplaincies reflect a disproportionately high percentage of evangelical Christian ministers, reports Tim Townsend of St. Louis Today. The discrepancy between evangelical Christian chaplains and non-evangelical military personnel could, theoretically, constitute a form of government endorsement of religion, in contravention of the Establishment Clause of the First Amendment to the U.S. Constitution. Striking a balance has proved daunting, since many Catholics and mainline Protestants hold a pacifist stance on war but also wish to challenge the evangelical monopoly on military chaplaincies.

Many evangelicals maintain that the high percentage of evangelical chaplains simply reflects the high percentage of evangelicals in the general U.S. population, but apparently this is a misguided notion. Citing Pentagon statistics, Townsend notes that while only 3 per cent of military personnel identify as Pentecostal, Southern Baptist, or some other type of evangelical Christian, at least 33 per cent of military chaplains belong to such faith groups, reflecting a significant discrepancy between the beliefs of chaplains and the beliefs of personnel. In addition, Pentagon sources indicate, 87 per cent of aspiring chaplains are earning their credentials from evangelical seminaries and divinity schools, suggesting that the discrepancy will only increase in future.

Military officials have argued that they recognize the problem and are making attempts to amend it. Quoting Pentagon spokeswoman Eileen Lainez, Townsend says, "In these various roles, chaplains respect the rights of others to their own religious beliefs, including the right to hold no beliefs". According to Townsend, Col. Steven Keith, a chaplain and commandant of the Air Force Chaplain Corps College in Fort Jackson, S.C., said, "[w]e look, in particular, for a pluralistic understanding or attitude", and, "[w]e want you to keep your theology, and be able to work with people of different theologies".

However, critics of the military's preponderantly evangelical chaplaincies have disputed these claims. Some of these critics come from more liberal theological backgrounds. In 2004, Eden Theological Seminary professor Kristen Leslie and her graduate students visited the Air Force Academy in Colorado Springs to train chaplains on how to deal with sexual violence on campus. As Townsend reports, soon after, Leslie, a professor at Yale Divinity School at the time, filed a report stating that she and her students observed cadets being "encouraged to pray for the salvation of fellow [cadets] who chose not to attend worship" and being told that those not "born again will burn in the fires of hell". Other liberal theologians and ministers have suggested that the military is serving as a platform for proselytization by evangelicals. Quoting Mikey Weinstein, a graduate of the Air Force Academy and president of the Military Religious Freedom Foundation, Townsend reports that "[t]hese are government-backed missionaries for Jesus Christ who see the military as a mission field, fecund and fertile for proselytizing".

There are a number of factors contributing to the imbalance of religions represented in military chaplaincies. These include an aversion to war among Catholic and mainline Protestant seminarians, the popularity of online courses for chaplain candidates at evangelical seminaries, and changes in the military's policy for chaplain staffing and education. Specifically, the Air Force used to replace chaplains who have left with new chaplains of the same denomination; now, however, the policy is to seek the "best qualified" replacement, Townsend reports Keith as saying, essentially letting the market determine. Consequently, the replacement is often an evangelical Christian.

Some military officials argue that it is not within the military's power to change the high percentage of evangelical chaplain candidates. Townsend quotes Keith as saying, "We mirror the chaplain corps on what's going on in the civilian sector [sic], so a decline in mainliners naturally means a decline in mainline Protestant chaplains". However, critics argue that the cause of religious preference in the military is marketing and recruitment on the part of evangelical seminaries that attract prospective chaplains with online courses, and that competition from more liberal seminaries is necessary to offset the evangelical monopoly. Military officials insist that the high number of evangelical chaplain students does not mean the same percentage will be admitted into military chaplaincies, but critics counter that if a given number of evangelicals enroll, that number will probably be mirrored in chaplaincy positions.

Liberal denominations have had a challenging time trying to stick to the pacifist tenets of their faiths while ensuring a fair representation of religious beliefs in military chaplaincies. Ever since the Vietnam War, mainline Protestants and Catholics alike have shown an aversion to participation in the military, including ministry to military personnel. At the same time, however, they have expressed a desire to ensure fair representation of the world's religions in the military's rank and file. Townsend quotes Leslie as saying, "[p]ost-Vietnam, mainline denominations wouldn't let military recruiters on our campuses," adding that "[i]n some ways, we did this to ourselves." Meanwhile, he reports Eden's president, Rev. David Greenhaw, as saying, "[s]chools like ours have tended to not want to be involved", and that "[y]ou have the full weight of ambiguity about even having a military, but ambiguity doesn't mean people in the military shouldn't have the ministry of the church." As a result, Eden has commenced with a program to begin training military chaplains reflecting the schools more liberal, interfaith, ecumenical theology.

The question whether to train chaplains for military service is indeed a problem for liberal schools of divinity. On one hand, it is in the interest of such institutions to fulfill their pacifist mission by boycotting the military; on the other hand, it is also in their interest to help ensure an inclusive, pluralistic, and accurate representation of religion among military personnel. Ultimately, schools like Eden will have to weigh the pros and cons and determine which approach would best realize their goals.

Give us your thoughts. Should pacifist schools like Eden help maintain religious diversity in military chaplaincies, or should they stay out of military affairs altogether?