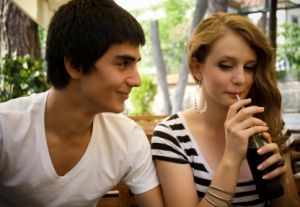 Bloggers, journalists, and commentators from all over the media have been offering their two cents' worth to explain why so many evangelical Christian teenagers have premarital sex. One explanation comes from Nicole Neroulias of Belief Beat. As Neroulias explains, [Biblical sexual mores][4] which may have made sense in the past no longer do today, and it would be ridiculous to preserve them just because they are found in a holy book:

... the Bible and traditional social mores come from a time when puberty and marriage were synonymous, if not even reversed. So "waiting until marriage" was kind of a no-brainer. But now, the average Americans don't wed until they are over 25. That's another decade or more of polishing those purity rings twice their lifetimes, at that point, and during the years when hormones and peer pressure are at their most insistent.

In other words, what Neroulias is saying, and something we should understand as interfaith wedding officiants, is that in the Bible it made sense to wait until marriage to have sex, because back then a person got married as soon as they were physiologically capable of producing children. The most obvious reason why premarital sex was considered immoral is that an unmarried person was physiologically unable to have sex (at least for reproductive purposes). Nowadays, however, people normally choose to marry long after they reach sexual maturity, so there is no longer a correlation between the two.

But will all of this finally prove to be the last nail in the coffin for youth abstinence movements? There is some indication that young people's commitment to abstinence is more or less transitory in nature. In the Relevant article, author Tyler Charles describes movements such as True Love Waits, which encourages teenagers to wear purity rings, sign chastity pledges, and pledge chastity during public ceremonies. (Probably not the type of occasion presided over by the average minister ordained online.) However, many youths in Christian abstinence movements eventually break their pledges. One of these young people, with whom Charles speaks in his article, is "Maria", who waited to have sex until she was twenty, when she realized almost none of her fellow college students was still a virgin. The problem becomes when evangelical Christian youth movements tell people who remain single long after they reach sexual maturity, "just keep waiting".

Perhaps what we should take from the Relevant article is that we should move on from Bronze Age moral codes, because they do not work for us in the present day--if they ever did. And even though more than three quarters of evangelical Christian teenagers say that premarital sex is immoral, even more end up having it, so there is obviously a psychological disconnect between what young people say they want, and what they really want. It might behove us to refrain from telling young people what is right and wrong according to a five thousand year-old book, and to start telling them to think for themselves, while providing them guidance, support, and educational resources along the way.

As a ULC pastor, what do you think? Should we keep telling young people to wait, or should we teach them sex before marriage is OK, depending on the individual, as long as it is safe?