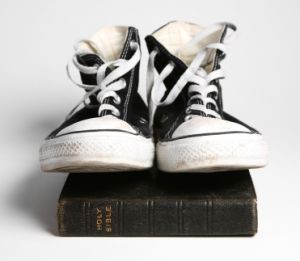 U.S. teens are gradually catching up with their European and Canadian counterparts and abandoning the trappings of religious faith that they view as irrelevant to their daily lives. Senior and youth pastors view the decline in teenage churchgoers as an omen of increasing waywardness among Americans, but secularists see it as a welcoming shift away from benighted superstition and towards a more free and rational society. What many contemporary megachurches in America fail to understand is that so many youth are disenchanted with religion because of its stubborn attitudes about social justice issues regarding women, gays, and other minorities.

Declining youth church attendance was not always an issue for churches. According to the evangelical Christian research company Barna Group, of Ventura, California, attendance in church youth groups a cornerstone of youth church involvement has been flat since its peak in 1999. According to Rick Gage of Go-Tell Youth Camps, registration fell 22% in 2009 yet levelled out this summer; it peaked in the late 1990s with 5,000 youths. Consequently, churches across the United States have been cancelling summer youth camp programs. Thom Rainer, president of Lifeway Christian Resources, contends that evangelical Christian youth camps and activity groups have lost their appeal among increasingly savvy youth: "A decade ago teens were coming to church youth group to play, coming for the entertainment, coming for the pizza. They're not even coming for the pizza anymore. They say, 'We don't see the church as relevant, as meeting our needs or where we need to be today.'"

But this mystified response by pastors, as if the dropping numbers must be the result of competition from other church-related activities, such as summer mission trips, seems a little naïve given the rapid changes taking place in the American social landscape today. More youths are treating Christian beliefs about salvation, sexual morality, and social hierarchy things that are purported to be foundational to a healthy and stable society with a critical mind, taking a comparative approach to religion and acknowledging Christianity as just one in a composite of world religions. Evangelical, Bible-based teachings become questionable for young women who do not accept that men should dominate then, for common-sense youths who cannot fathom how same-sex affection could be seen as abominable, or for racial and ethnic minorities who find themselves swamped by masses of white people with their own problems in the audience of some stadium-sized megachurch. In other words, today's teenagers don't make easy sheep to herd, and they are not as easily lured away from protests and demonstration rallies with the promise of pizza parties.

Progressive politics among teens is not the only thorn in the side of church youth groups, however. Some youth pastors view technology as an obstacle to religious faith rather than a medium through which to spread it (or to proselytize). Barna president David Kinnaman blames advances in social networking technology for the low numbers: "Talking to God may be losing out to Facebook". For people like Kinnaman, religious faith and technology are incompatible, and the latter is seen to distract young people from the former. But the two are not necessarily incompatible at all. Social network Web sites, smartphones, and other forms of communication technology need not be viewed as competition rather, they can be exploited to spread a church's message. Church Web sites, religious social network sites, and even prayers and sermons can now be accessed through a pocket-sized telephone. (Read our blog entry on how technology has revolutionized the way people worship.) Indeed, with the advent of Web-based and online churches, this may be the way to go for youth groups in the future.

In order to boost youth group numbers, today's churches will have to find creative ways to adapt to contemporary society. To a degree, this may involve re-examining their take on the teachings of the Bible and how to adapt these to the exigencies of today's social justice causes, but this is a very hard thing to plug to evangelicals, who believe that the Bible is the literal inerrant word of God. As one youth put it, "I started to question if it was something I always wanted to do or if I just went because my friends did It just wasn't really something I wanted to continue to do. My beliefs changed. I wouldn't consider myself a Christian anymore." At some point, something will have to give let us hope it will not be youth social consciousness.