Is Christian Religious Freedom Under Attack?

Religious freedom has been a hot topic across America in recent years. It has generated contentious debate around the First Amendment right to free exercise of religion, and, specifically, how far this right should extend. Since Christianity is the dominant religion in America, the majority of disputes involve Christian values. Although recent expansions of civil rights have been widely celebrated among marginalized groups and their supporters, many Christians argue that their basic religious freedoms are being infringed upon as a result. Perhaps nowhere is this more apparent than in the arena of private business. By evaluating several controversies involving religious businesses, we hope to shed some light on the debate. The central question is: where does legitimate religious belief end and discriminatory treatment begin?

You may remember the Hobby Lobby case that went to the Supreme Court two years ago. The arts and crafts store, which has over 100 locations throughout the U.S., refused to provide certain kinds of birth control in their employee health-insurance plans. Namely, the plans excluded emergency contraception methods such as Plan B (also known as "the morning after pill"). It is a pill taken to prevent pregnancy in the hours after sexual intercourse has occurred. Many pro-life advocates argue this is equivalent to handing out an over-the-counter abortion device. In the end, the Court ruled 5-4 that privately owned religious companies such as Hobby Lobby did have the right to deny these forms of birth control in their health plans. Pro-life and religious freedom advocates celebrated a huge win. That was two years ago. Since then, the tide has definitively shifted. 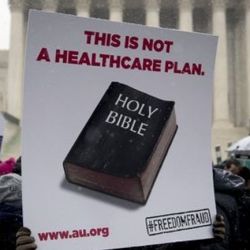 Recently, a very similar case made the news. It involved a Washington state pharmacy chain owned by an individual of strong Christian faith. They refused to stock emergency contraception in their stores, believing these forms of birth control to be morally wrong. However, a 2007 FDA requirement declared that pharmacies have to carry and sell all drugs approved by the FDA, which of course includes emergency contraception. The pharmacy challenged the rule, and the case made it all the way to the Supreme Court. However, the Court declined to hear it, resulting in a de facto loss for the pharmacy they will now be required to provide birth control in their stores. However, the court rulings have not been limited to women's rights.

Christianmingle.com is a dating site for those who identify as Christian. The site was created to help single Christian people looking for a likeminded partner. Since homosexuality is generally frowned upon in the Christian community, ChristianMingle.com didn't accommodate people seeking a same-sex relationship. During sign up, the site would ask users to select between just one of two options: a man looking for a woman, or a woman looking for a man. This did not go unnoticed. In 2013, they were challenged in court by two gay men who argued that the dating website discriminated against them. After an extended legal battle, the website finally conceding defeat and agreed to include an option for same-sex couples. But some people are still fighting.

Perhaps the most controversial disputes have involved Christian bakers and florists who refuse to provide their services for gay weddings. Texas resident Ben Valencia and his fiancé Luis encountered one such bakery when attempting to order a cake for their upcoming wedding. After realizing they were a gay couple, the bakery's owner refused to sell them a cake, citing a belief that marriage should be between a man and woman. Asked what it was like to be turned away because of his sexual orientation, Valencia told the local papers that it "makes you feel dehumanized". Valencia wasn't angry, but explained that he was generally saddened by the experience.

Places like the bakery in Texas argue that as private businesses, they should have the right to choose who they serve. However, critics were quick to point out that the same argument had been used to deny services to black people prior to the Civil Rights Act. The courts tend to agree whenever legal challenges are brought, the religious businesses end up losing. The courts explain their decisions by saying that just because you disagree with someone's way of life, it doesn't give you the right to deny them service, no matter how sincere your religious beliefs are.

Where is the Line?

When evaluated as a whole, it clear that opinions are shifting on the notion of religious freedom. For generations, religious beliefs enjoyed certain protections under the First Amendment. No longer, it seems. Increasingly, courts are declaring that if these beliefs are perceived as discriminatory in any way, they are unconstitutional. As a result, many Christians feel as if their fundamental belief system is under legal attack. What do you think? Where is the line between expressing religious beliefs and discriminating against others? Are Christians guilty of crossing that line, or are they being unfairly targeted?