Can God and Aliens Co-Exist? 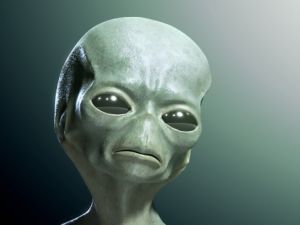 "Of course God and aliens can co-exist", you might say, but there are age-old beliefs predicated on the assumption that humans are the "apple of the divine eye". Recent research suggests that while most Americans find no conflict between religious faith and scientific discovery, religious people are less likely to believe in extraterrestrial life than secular people. For many ordained ministers of the Universal Life Church it begs the question, why must there be a conflict, and how can we find common ground?

The idea that religious people have grown increasingly comfortable with advancements in science may not be as contradictory as it seems. According to a 2009 report from the Pew Research Center, 61% of Americans said new scientific discoveries do not conflict with their religious beliefs. The same report revealed that 52% of people who attend religious worship services at least once a week also see no conflict between new scientific discoveries and their personal religious beliefs. Most religious people seem to embrace science.

This widespread acceptance of general scientific truth does not extend to all fields within science, however, and we see a much more skeptical attitude from religious people regarding the existence of extraterrestrial life. A survey conducted by Survata, a market research company, shows that 37 percent of those surveyed believed in extraterrestrial life, 42 percent were unsure, and only 21 percent did not believe in it. Most noteworthy, however, was the fact that atheists and agnostics were 76 times more likely than Christians to believe in the existence of life beyond planet earth.

Scientists are only going to make further discoveries that challenge the religious worldview of many. Programs like NASA's Mars Rover and Kepler telescope are already unveiling potential signs of extraterrestrial life. For many Christians this prospect threatens to dismantle the very foundation on which their entire belief system is built. After all, if Jesus came to earth to save us from our sins, what about the life on other planets? How will we reconcile our religious beliefs with scientific fact?

Eventually we will all have to face the possibility that humans are not alone in the universe. For the religious, this may mean taking a different perspective on the cosmos. Maybe extraterrestrial life actually complements the idea of a higher power by testifying to its greatness.