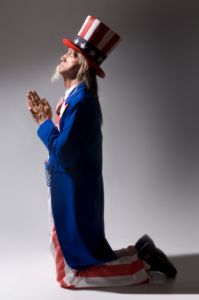 You may have heard of Mrs. Betty Bowers, the wealthy, elegantly dressed, neatly coiffured brunette who gives lessons on being a good Christian while browsing the premier designer department at Neiman Marcus. The toffee-nosed ambassador of "godly" virtues routinely skewers those same virtues in a series of satirical YouTube videos called "Mrs. Betty Bowers, America's Best Christian." In reality, the fictional character raises some provoking critiques of religion and government in American society.

Perhaps Ms. Bowers's favorite topic concerns religious influence in government. In one video, she coyly points out that Article VI of the U.S. Constitution "pretends to dismiss all religions as irrelevant to running a country but as America says every National Day of Prayer, who cares what the Constitution says?" In another video, she takes at jab at religious tax subsidies: "To a deity always strapped for cash, atheism just doesn't make good business sense. For starters, atheism is the only belief about God in America that is taxed". Sarcasm aside, we can appreciate the glimmer of truth behind this statement about government bias.

She uses the same dryly acerbic tone to attack religious anti-intellectualism. "Where there's proof, there can be no faith lucky for God", she says in the video about tax subsidies, adding that "of course, in America today, it's also true that where there's faith, there can be no proof, because science is something you choose to believe, not try to understand". Many ULC ministers will recall the many times and places that public school science is being undermined by religious fundamentalism.

Where the sarcasm was slick before, it proves utterly dripping in her critique of unbridled pride and self-centered supplication. In a video called "The Perfect Thanksgiving Prayer", America's best Christian gives thanks to God for her "impeccable sense of hospitality", imploring him to "give those without food in their tummies left-overs, those without clothes on their backs cruise wear, and those without you in their hearts grease-fires!" The prayer is rendered so absurdly condescending that her point becomes obvious: American Christians should show more humility.

Mrs. Bowers's approach might rub some people the wrong way, but it does prove effective. What do you think about the Web series? Does the satire turn you off, or win you over?