Called to a Higher Purpose 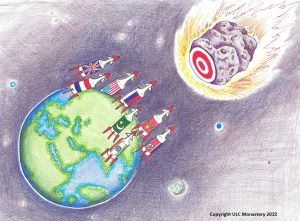 Since the 1980's, when the Universal Life Church Monastery was still a homeless shelter and an old Seattle church, we have called upon the nations to disarm against one another and coordinate a defense project to re-purpose our weapons of mass destruction. While thirty years ago this may have seemed lofty at best, scientists today discuss the merits of similar programs.

In 2004, astronomers discovered an asteroid that appeared on track to collide with Earth. They dubbed it Apophis after the Ancient-Egyptian spirit of destruction and chaos. The scientific community was whipped into a frenzy working out what could be done to stop it from impacting and razing our planet. It was later discovered that Apophis would not present a threat, not until much later than expected. But after the dust settled, the questions remained about how we would save Earth from destruction by a heavenly body.

Neil Degrasse Tyson, the astrophysicist and head of the Hayden Planetarium (perhaps best known for reclassifying Pluto as a Kuiper Belt Object), often lectures on what can be done if we discovered a N.E.O. (near-Earth object) on a collision course. All of the best strategies involve as-of-yet undeveloped technologies and require global cooperation but there are things we can do in the meantime. 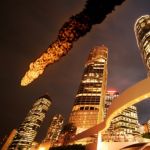 A direct nuclear explosion on an incoming asteroid, an idea immortalized by the movie Armageddon, would be a vital part of any last-ditch effort to avoid total catastrophe. It would require considerable fire power and in all likelihood would just break up a large N.E.O., but not stop large pieces from impacting Earth's surface. NASA has proposed this idea, calling it the Nuclear Interceptor method. A better use of our missiles would be to use an indirect explosion to push the object off course years before it is set to collide. This method is potentially dangerous in that we would have little control over the effect, and be given only one chance.

The more controlled options are just out of reach for our technology, and so at this point they are in the realm of science fiction. One such option is to send out rockets to attach to the N.E.O. and steer it away. The amount of power needed to propel an object the size of several football fields would be massive, and we would require an advanced enough warning to push it far enough off its trajectory. A more elegant solution put forth by Tyson would take advantage of the gravitational pull every object exerts on its surrounding objects. A single, large spacecraft could be sent out to hover above and travel with the asteroid. Again, if enough time is given, the gravity of the craft would deflect the asteroid's path while still allowing for the implementation of any one of the previous methods as a back-up plan. 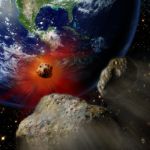 There could be countless other options but the first step requires leadership. President Obama should not cave to pressure; even in hard times we must fund our safety and our dreams. We must advance technology and broaden our conception of the world, including what could threaten it. Diplomacy can pave the way forward into a global community.

We are not forgetting the other obligations of our government. This project does not mean painful cuts to necessary programs. As Neil Degrasse Tyson recently pointed out, the bailout of the American banks was a greater sum of money than the entire fifty-year budget of our national space program. It is time to prioritize science and innovation again and cut our spending on wars and tax cuts for the wealthiest citizens. Not only could this render benefits to advance trade and cooperation while preparing us against potential extinction, but the notion resonates with us morally a world at peace, united in a common goal. For these reasons, we cannot delay.