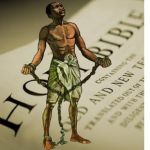 How would you react if you drove past a billboard depicting a Bible verse that read "Slaves, obey your masters"? Incensed, perplexed, or curious? In the U.S. state of Pennsylvania, a group of vandals responded by ripping the offending poster to shreds, leaving only the top half intact (which, ironically, left the most offensive passage intact). The billboard was sponsored by PA Nonbelievers and the Pennsylvania chapter of American Atheists, who have explained that the purpose of the billboard was to show that the Bible is racist. Passersby have accused the atheists of racism, showing once again the failure of non-critical thinkers to grasp the nature of satire.

The controversy began when the Pennsylvania House of Representatives passed House Resolution 535 declaring 2012 the "Year of the Bible". In response, PA Nonbelievers made the following statement, according to Hemant Mehta of the blog Friendly Atheist: "[t]he 'HR 535 Year of the Bible Resolution' declared by the PA House of Representatives asked us to 'study and apply the teachings of the holy scriptures'. After considering the bill, we felt it necessary to highlight one of those teachings and share it with the public in the form of this billboard. It will be posted starting around March 5th for 28 days, and stay up throughout the month of March." American Atheists added,

[t] he fastest way for a Christian to become an Atheist is to read the bible. We want them to recognize that they see the application of the verse and how awful the bible is and come out of the closet. We especially want the in-the-pew atheists to begin to question why they are continuing the charade of going to church and giving their money in coercion of the bible [sic].

American Atheists also told Mehta that African American members of their group "are overwhelmingly supportive of the billboard". On condition of anonymity, a man told CBS 21, a CBS affiliate in Harrisburg, that he witnessed five to ten individuals deface the billboard, explaining that they seemed to belong to a militant group the purpose of which was to take matters into their own hands when the government refused to intervene. In its entirely, the billboard read, "Slaves, obey your masters (Colossians 3:22)" in large print, with the words "This lesson in Bronze Age ethics brought to you by The Year of the Bible and the House of Representatives" below the Colossians verse. 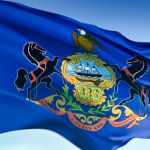 Plans are still in the works to put up a new billboard to persuade Pennsylvanians to fight back against the House Resolution. The owner of the billboard space, Lamar advertising, originally agreed to the idea since it would create important dialogue, and said the atheist groups still have the option of replacing the vandalized billboard with something else, reported Ewa Roman of CBS 21. The billboard's artist, Ernest Perce V, said the purpose of the billboard was to urge people to contact state representatives in an effort to get rid of the resolution, according to Rowan. "My thinking was, we're in PA where a large number of people are Christian bible readers, they know what that verse meant [sic]", she reports him as saying. Perce told the station he would continue with his mission to campaign against the state's "Year of the Bible" resolution using his art as a tool to challenge beliefs, she says, adding that eight designs have already been created, and PA Nonbelievers and American Atheists plan to take advantage of ad space on buses, too.

Almost immediately, State Rep. Thaddeus Kirkland criticized the billboard, arguing that it took the Bible verse out of context, according to the Associated Press. But this is argument is pretty much false. To understand why, we must look at the context of the passage used in the billboard. The Epistle to the Colossians, believed to have been written by the Apostle Paul, is divided into two halves: in the first half (Chapters 1 and 2), Paul develops his understanding of Christian doctrine, and in the second half (Chapters 3 and 4), he teaches the proper domestic and social conduct of Christians. He argues in the doctrinal first half that only Christ needs to be worshipped, because Christ is supreme over all creation, that non-Christian practices became obsolete with Christ's crucifixion and resurrection, and that Christ is the head of the church and the sole mediator between humans and the divine; he argues in the second half that belief in the supremacy of Christ leads to proper social conduct, such as fathers not provoking their children (3:21), wives submitting to their husbands (3:18), and, of course, slaves obeying their masters (3:22). The command is straightforward. There is no contextual caveat to slaves obeying their masters: neither the immediate context nor the Epistle's overarching message vitiates in any way the message that slaves should obey their masters (or women, theirs, for that matter). Paul simply commands slaves to obey their masters, so the atheists have not taken the verse out of context, and they were correct to suggest that it meant exactly what it says.

If the context of the verse only confirms the pro-slavery message of the verse, and if Christians should know this about their own Bible, why are they accusing the atheists of racism? The most obvious answer might be an inability on the part of non-critical thinkers to grasp the concept of satire. Satire is a literary strategy in which the author attacks a belief or practice by pretending to support it, showing the absurdity of the position they have taken using sarcasm, irony, etc. A prime example is Jonathan Swift's A Modest Proposal, in which Swift pretends to support the cannibalization of Irish babies as a way of denouncing Ireland's negligence toward child poverty and overpopulation. So it is with the atheists' billboard. It is clearly framed in such a ridiculous manner as it cannot be genuinely pro-slavery, and must be intended to expose the absurdity of pro-slavery Bible beliefs, as the atheists themselves have explained. But satire is almost too nuanced a concept for the average American to comprehend, hence the misunderstanding.

In light of these observations, what should be our attitude as Universal Life Church ministers toward the Pennsylvania House's "Year of the Bible" resolution, the atheists' billboard, and its ultimate demise at the hands of cretinous vandals? It isn't so black-and-white, and it requires engaging in honest dialogue. Certainly, people have a responsibility to show sensitivity for others' feelings in dealing with accusations of racism and pro-slavery attitudes, but they also have an intellectual responsibility to analyze and process literary or rhetorical techniques which attack these very things, though it may not be so obvious on the surface to the untrained eye. Once Christians are able to wrap their heads around this sort of Biblical criticism, they will realize it isn't the atheists who are racist--it is their own Bible that is.