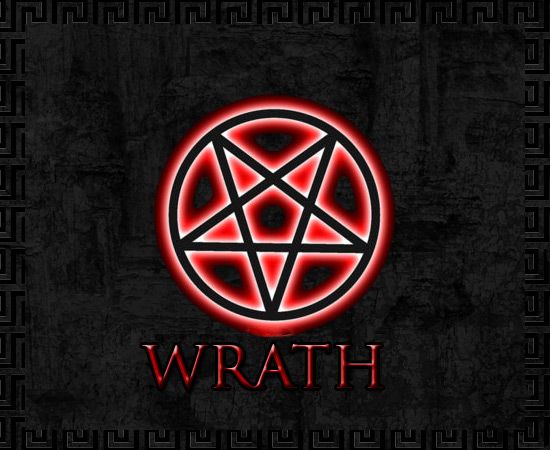 If we were to chart the timeline of our lives, how many notches would there be to mark the instances when we became angry? Sadly, too many to count or recall.

In most cases, we are sorry or even ashamed because anger can make us do things that are uncharacteristic of our normal selves. Perhaps while stuck in traffic we said things we shouldn't have. Or maybe while waiting in line at the DMV we lost our temper and treated others with an attitude. It's no surprise that impatience can lead to anger; wrath's opposing virtue is Patience.

Wrath is different than the other vices in that it is not necessarily rooted in selfish desire. Wrath is more of a response to outward influences and circumstances. Both man and God express wrath, but there is a vast difference between the two.

Wrath is an emotion characterized by feelings of intense anger and hatred. Wrath can be either just or unjust. Unjust wrath is destructive behavior, impatience, violence, and the things associated with them. Just wrath can be a response to a perceived wrong or injustice however in man this kind of wrath is rarely justified.

The Unrighteous Wrath of Man

As mentioned before, we humans most commonly get angry as a response to some sort of perceived wrong or injustice. In the heat of the moment, our anger and frustration can cloud good judgement. Sometimes we feel our anger is justifiable, but our notions of justice and injustice are deeply flawed. Those who love Christ should always be slow to anger when wronged or treated unfairly (James 1:19-20). Considering this, it's important to distinguish between getting angry and giving in to anger. 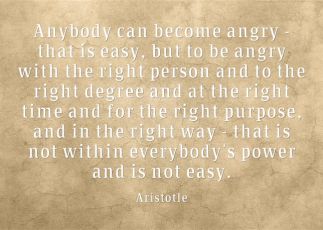 "Be angry, and yet do not sin; do not let the sun go down on your anger" (Eph. 4:46). It is bad to get angry, but worse to give in. Anger is not always sin, but it can easily escalate into sin. If someone is discriminated against based on their race, gender, sexual preference, etc. they would probably get angry. But does this give them the right to start yelling and screaming, or going around complaining to all who will listen? Or even thinking ill thoughts or curses against the one who wronged us? Doing so has a negative influence on everyone involved, and worst of all, incites others to become angry as well.

Unless we put aside feelings of anger, wrath, malice, and slander (Col. 3:8) we will only perpetuate the chaotic cycle.

The Righteous Wrath of God

In Romans 1:18-20, Paul the Apostle lays out justification for the wrath of God:

The wrath of God is being revealed from heaven against all the godlessness and wickedness of people, who suppress the truth by their wickedness, since what may be known about God is plain to them, because God has made it plain to them. For since the creation of the world God's invisible qualities his eternal power and divine nature have been clearly seen, being understood from what has been made, so that people are without excuse.

God's wrath is against injustice, wickedness, sin, and evil. To summarize, God is just in pouring out His wrath on the human race because we have sinfully rejected His revelation of Himself and have worshiped the creature rather than the Creator.

In the book of Nahum we are given a different picture of the wrath of God: He is jealous, avenging, and wrathful towards his adversaries and enemies. But he is also slow to anger and great in power. "His way is in whirlwind and storm" ; "the mountains quake before him, the hills melt, the earth heaves before him"; "his wrath is poured out like fire, and the rocks are broken into pieces by him." (Nahum 1:2-6)

What is the difference between just and unjust anger?

The wrath of God is necessary and just because God is the embodiment of all righteousness, love, mercy, and grace. If God loves righteousness, he must also hate evil. If he were all love and no wrath, he would not be God because he would be unrighteous. But he is a righteous God who feels indignation every day (Psalm 7:11).

The wrath of man is sinful and unjust because men are depraved creatures, ruined by sin. All vengeance against injustice, wickedness, and sin belongs to the Lord. Though we may feel like it's virtuous to get angry about injustice, the bible tells us otherwise: "Never take your own revenge, beloved, but leave room for the wrath of God, for it is written, "Vengeance is Mine, I will repay." (Romans 12:19). Therefore, "Do not be eager in your heart to be angry, for anger resides in the bosom of fools." (Ecclesiastes 7:9)

Up until now we have briefly looked into the difference between the wrath of man and the wrath of God, as well as the difference between just and unjust wrath. While not all anger is sin, it is not right to hold on to anger for "just" reasons and certainly not for selfish, petty reasons. We know that at the end of days, the "just" anger we feel will be avenged so thoroughly and perfectly that every abuse, wrongdoing, and injustice that has ever been done, will be made right. As it is written, "He will wipe every tear from their eyes. There will be no more death or mourning or crying or pain, for the old order of things has passed away." (Revelation 21:4) If we hear and understand the instruction in the Word, it is easier to let our anger go.

In the meantime we must do all we can to live in peace and patience with our neighbors. We will not always succeed in this quest. However, we can always turn to scripture for assistance. In Romans, Paul gives us encouragement : "Do not repay anyone evil for evil. Be careful to do what is right in the eyes of everyone. If it is possible, as far as it depends on you, live at peace with everyone." (12:17,18)

What the Bible says about anger