President Trump's announcement last December that the U.S. will recognize Jerusalem as Israel's capital and move its embassy there was met with immediate consternation from many in the international community. Many argued the decision was counterproductive to peace in the region and warned it could even result in a further-destabilized Middle East.

Those feared were renewed this past week when protests in Gaza over the official U.S. Embassy move to Jerusalem turned bloody. Over 50 Palestinians were reported dead, sparking condemnation from Israel's critics and causing anxiety about the potential breakout of a third Intifada.

Among Israel's most ardent defenders, unsurprisingly, were Jewish groups around the world who say Jerusalem is the rightful capital of the Jewish people. However, another unlikely ally of Israel has emerged: evangelicals. Indeed, few cheered the embassy move louder than evangelical Christians in the United States.

John Hagee, founder of the Christians United for Israel (CUFI), called the president's decision a "bold and courageous stand." Hagee and other so-called "Christian Zionists" had been lobbying Trump to make good on his controversial campaign promise for months.

But why would Christians support more Israeli control over a city whose holy sites belong to Jews, Christians and Muslims alike?

In their eyes, it's a crucial part of fulfilling biblical prophecy. Many evangelicals base their support for Israel on the notion (laid out in the Book of Revelation, as well as several Old Testament passages) that Jewish possession of Jerusalem especially the Temple Mount in East Jerusalem is a prerequisite for the eventual Second Coming of Christ. Therefore, they believe, Christians should do all in their power to support Israel and encourage it to take over full control of the ancient holy city.

It should be noted that not all evangelical groups align with this view. However, many of those who reject it still feel a deep kinship with Israel. 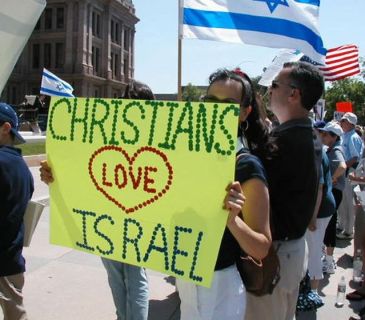 Theology aside, many Christians see Israel as an essential ally in a Judeo-Christian civilizational struggle (a holy war, if you will) against radical Islam. This idea has gained immense traction due to the rise of terror groups like ISIS and Al-Qaeda, who profess a desire to conquer not just the Middle East, but the world.

The Israeli government, meanwhile, has spent decades cultivating political and financial ties with American evangelicals, following waning support from more liberal American Jews and Protestants. Evangelicals, in turn, have supported the establishment of Jewish settlements in the Palestinian territories.

The U.S. decision to recognize Jerusalem, while perhaps ill-advised, obviously did not create three thousand years worth of resentment between Israelis and Palestinians, Muslims and Jews, Arabs and non-Arabs. Jerusalem is merely the flash point - the symbolic stick of dynamite all sides claim to hold the entire region hostage.

So, while evangelical Christian Zionists cheer the move and eagerly eye that biblical prophecy, the reality seems to be that more violence and conflict are inevitable before anything changes.

The Second Coming, until further notice, remains on the apocalyptic backburner.