Who Would Jesus Shoot? 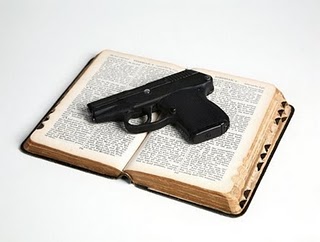 Exactly who would the "Prince of Peace" gun down if his congregation were under attack? And exactly who would attack a congregation of Christians who were doing nothing but worshiping in peace inside their own church? Well, there is bound to be a chimera out there somewhere in a land full of fear and delusion, where pre-emptive action is required to thwart a long list of imagined threats. Perhaps they are the homosexuals, or the feminists, or the Muslims, or the foreigners who make up a sizeable chunk of the United States population. For the pistol-packing usher, danger might be lurking in every corner.

This seems to be the mindset of many church-goers and lawmakers in the U.S. state of Louisiana, where a bill allowing pastors to permit guns inside church doors is currently being revived after a recent rejection. On Wednesday, 12 May, the Louisiana state House of Representatives passed the bill 74-28, sending it off to the Senate for consideration. Implementation of the bill is a "'matter of choice'" for individual religious leaders, said Republican state Representative Henry Burns, who stated that every place of worship in the state of Louisiana will remain a gun-free environment unless the leader of that denomination elects certain certified individuals to carry guns on church property. But will it remain fear-free, and, if it does not, will it then remain gun-free?

Not all lawmakers share in the eagerness to get the bill passed by the Senate, however, and the difference in attitudes runs largely along partisan lines. Interestingly, what both Republicans and Democrats do is assume a sort of default Christian perspective on the issue, taking for granted that Christianity is the law of the land and their decisions are founded on its tenets. Republican state Representative Ernest Wooten invoked the Bible when he reportedly said, "I want to see in the Bible where it says you can't bring a gun to church," while Democratic state Representative Barbara Norton, an opponent of the bill, reportedly argued, "If God is looking down on us today I don't think he is happy with us discussing how we can carry our guns to church . . . . The church is a place of peace. I don't think God said it was OK to carry a gun in the house of the Lord." Both lawmakers profess to base their decisions on the desires of God or the teachings of the Bible, as though these should automatically guide the legislative process. But in a country where religious belief and job duties are so subtly, inextricably intertwined (even though this is explicitly forbidden), public declarations on religious duties by on-duty government employees is mere custom. So we are stuck with differing Christian attitudes on weapons in places of worship.

But if we, in turn, can take it for granted that Louisiana is an overwhelmingly conservative Protestant Christian jurisdiction, and if we are able to ignore the fact that any discussion in that state's legislature will, at least for a time, take place within an annoyingly inappropriate and presumptuous religious framework, then we must ask ourselves who is right Christians who support guns in churches, or Christians who oppose it.

Much more plausible, and palatable, is Rep. Norton's assertion that God is a powerfully peaceful, loving being. For Norton, church is a refuge from fear, violence, and conflict, a place to commune with something transcendent in the hope that we can quell our base instincts and help one another based on empathy. If a congregation worships in peace, if they conduct their prayers and sermons without provoking others, but rather to help and heal them, what have they to fear? Nothing they have no reason to expect violence, because they have given nobody reason to commit acts of violence against them in the first place. Posturing violence only invites further violence, creating a vicious cycle in which one side constantly strives to outgun the other, whereas promoting and embodying harmony can only inspire greater harmony, and hopefully this is what we all strive for. Peace begets peace.

The vicious cycle of outgunning one's hypothetical foe seems to be the norm in the American south, but this anxiety too easily transforms into paranoia, breeding the very violence people fear. This is highly ironic, given that the Christian religion, with its famous (and uncannily street-smart) "turn the other cheek" ethos, which is supposed to be so strong in this region, begs us to create peace by promoting it, not by disdaining it as cowardice. It remains to be seen which argument finally convinces the Louisiana Senate when it votes on the bill in the upcoming weeks. In the meantime, we would like to hear the views of our ministers on the matter should Louisiana ban, or allow, guns in churches?