Was Saint Patrick Irish? And Did He Chase Snakes? Time for Some Mythbusting

Here's a fun game to play: walk into a bar on Saint Patrick's Day and ask drunk partygoers where Saint Patrick is from. Ireland, right?

Not exactly. Saint Patrick was an Englishman.

But that's just one of many misconceptions surrounding the patron saint of Ireland.

Saint Patrick’s Day has gained international reputation as a raucous celebration of drinking, the color green, and all things Irish. Not to mention pinching.

But for all the Guinness that gets consumed each year on March 17th in his name, few revelers could tell you much (accurate) info about St. Patrick himself. So who was this guy anyway, was he really that into green, and why does he have an entire holiday named after him?

His father was a wealthy deacon, although Patrick himself was not particularly religious and it’s been speculated his father only pursued his career for tax incentives, meaning biblical literacy probably wasn't a big part of Patrick's childhood learning.

By far the biggest misconception about Saint Patrick is his heritage. People naturally assume he was Irish for obvious reasons, but in fact, Maewyn Succat (Saint Patrick’s given name) was born around 386 A.D. in Bannavem Taberniae, part of modern-day England. That's right: Saint Patrick was an Englishman.

At the age of 16, Patrick was kidnapped by raiders and taken to Ireland, where he was forced to work as a laborer. Because of his fear and separation from his family, he turned to his faith, growing devout as he sought solace in God.

Per his own writings, Patrick repeatedly heard God speak to him. He eventually escaped his captors, walked 200 miles to an Irish port. The ship's pagan captain didn't like the look of Patrick, possibly because he'd just walked 200 miles after enduring years of slavery, and demanded he "suck his breasts" - which would apparently show submission to the captain's authority. Although Patrick declined that particular offer, he did try and convert the pagan crew of the ship to Christianity, which was good enough to earn him passage back to England.

After returning to his homeland, Patrick received another heavenly vision, this one telling him to return back to Ireland and spread the holy word.

The next forty years were spent converting thousands of Irish Pagans to Christianity. And he was apparently very good at it. One of Patrick's strategies was integrating aspects of pagan culture into Christian tradition.

“He used bonfires to celebrate Easter since the Irish were used to honoring their gods with fire. He also superimposed a sun, a powerful Irish symbol, onto the Christian cross to create what is now called a Celtic cross, so that veneration of the symbol would seem more natural to the Irish."

Patrick's quest to convert a polytheistic society to Christianity wasn't always easy. At one point he was robbed, beaten, and potentially even awaiting execution for his attempts to convert the local pagans.

Patrick was so successful in spreading Christianity that he eventually was elevated to sainthood.

Driving Out the Snakes

It was the results of this missionary work that sparked one of the most enduring myths about Saint Patrick: that he drove the snakes out of Ireland.

This has been proven false – snakes are not native to Ireland, nor does there exist any fossil record of snakes ever living there.

So how did the myth start? There is wide speculation that these "snakes" in question are not snakes at all, but a crude reference to Pagans. The success of Patrick's missionary work eventually drove Pagans out of Ireland – largely through conversion to Christianity. 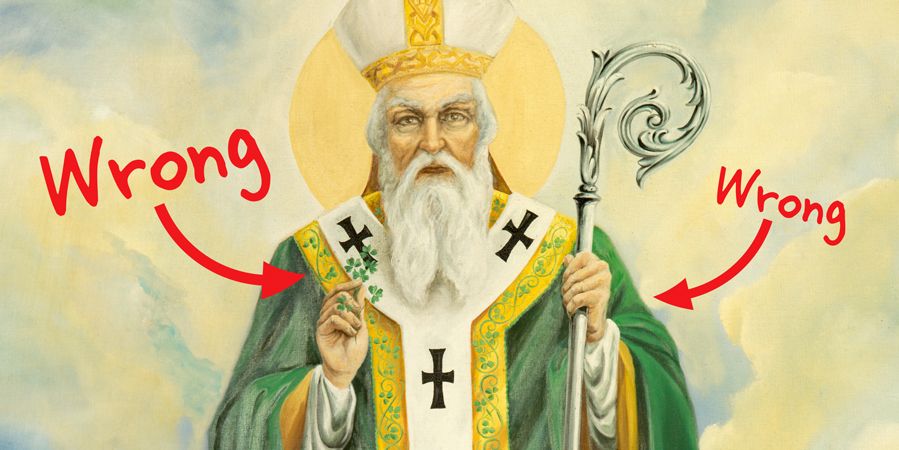 We all associate the color green with Saint Patrick's Day. You're even liable to get pinched if you go to school or work without wearing something green. But Saint Patrick's favored color was blue, historians say.

Because of that, for hundreds of years, blue was Saint Patrick's color of choice and paintings and stained glass windows, and was the de facto color of Ireland itself. But Ireland's association with green took off during the 1798 Irish Rebellion, when clovers became a symbol of Irish nationalism and wearing green lapels became commonplace.

Over time, that association grew until the color green was intertwined with the image of Ireland itself. So go ahead, wear your blue jeans out on Saint Patrick's Day, and if anyone tries to pinch you, just show them this article. It'll come in handy... in a pinch.

That's roughly the sum of what we know about Saint Patrick. His life remains mostly a mystery, which has led to all sorts of speculation and myth-building.

So before you enter a Saint Patrick trivia contest this year, remember this quote from Mark Twain: "it ain’t what you don’t know that gets you into trouble. It’s what you know for sure that just ain’t so."

Here are some more common myths that just ain't so: