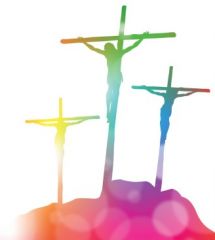 Just a few days ago, an ancient Bible that suggests Jesus Christ was not crucified captured the public's attention once again when it was installed in a museum in Turkey. The 1,500-year-old tome, written in Aramaic, purportedly contains the Gospel of Barnabas, a disciple of Jesus whose book was rejected as apocryphal by the early Church. Like the Dead Sea scrolls, the Gospels of Saint Thomas and Mary, and other ancient texts, the book's mere existence seems to challenge the foundations of Christian belief.

The unusual book was originally re-discovered by the public in 2000, when it was confiscated from smugglers in the Mediterranean region by Turkish authorities. According to a Turkish government press release, the smugglers were accused of trafficking in antique relics, performing illegal archaeological digs, and possessing explosives. Estimated by experts to be worth approximately $28 million, the Bible is made of blackened vellum pages and written in Aramaic using gold ink. Aramaic which is nearly extinct, and only spoken in a small village near Damascus is the language Jesus would have spoken.

It is the message conveyed in the book, now on display at the Ethnography Museum of Ankara, which has caused the most controversy, however. Although Barnabas was one of Jesus's disciples, his gospel's message differs from those of other disciples on critical points. Unlike other gospels, the book argues that Jesus Christ was not the son of God, but a mere prophet who passed on the word of God. He was not crucified, it asserts, but he ascended into heaven still living. It was in fact Judas Iscariot who was crucified, the author states.

It goes without saying that such unorthodox teachings fly in the face of fundamental Christian belief. Among many Christians, especially Protestant evangelicals, the crucifixion and subsequent resurrection of Christ is the most important event in the Christian story, since it symbolizes God's sacrifice for humanity. Without such a sacrifice, humans have no way to gain everlasting life, because, in the minds of evangelicals, innocent blood (the blood of Christ) had to be shed to atone for human sin. But not all Christians believe Christ's sacrifice is necessary to gain everlasting life, so the Gospel of Barnabas poses little, if any, threat to them.

The Gospel of Barnabas is only the latest in a series of ancient documents and texts shedding new light on early Christian belief. But what will it mean for the future of Christian doctrine and theology? And do Christians really need the concepts of sacrifice, resurrection, and atonement?