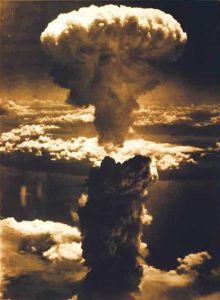 If the right-wing jingoism asphyxiating the United States in the presidential campaign arena is not bilious enough to make you retch until your entrails spill forth, consider the secret Jesus Loves Nukes program formerly run by the United States Air Force. The program, led by military chaplains, trained missile officers to believe that the Bible justifies the use of atomic intercontinental ballistic missiles on civilian populations. Although the program was suspended after being exposed in the media, it illustrates perfectly the danger of using religion to excuse just about any military tactic.

The "ethics" program, as it was called, consisted of religion-based military training founded on the "Christian Just War Theory". The unofficial "Bible" of the program (other than the actual Bible itself) is a forty-three-page Powerpoint presentation featuring a number of non sequiturs and subjective, personal, non-scholarly Biblical exegesis justifying the use of nuclear weapons on civilians. The Military Religious Freedom Foundation obtained the documents under the Freedom of Information Act after thirty religious missile officers, mostly Roman Catholic and Protestant, contacted the foundation complaining about the program.

What they found was jaw-dropping.

The Powerpoint presentation gives numerous passages and citations from the Bible supposedly justifying missile warfare. Among these are the Old Testament stories of Abraham organizing a war to save Lot (Genesis 14) and how God motivated "judges" to fight and deliver Israel from its oppressors. The presentation also cites New Testament passages such as Luke 4:13, in which John the Baptist implies that baptism is not incompatible with warfare, Luke 7:10, in which Jesus uses the Roman centurion as a positive example of faith, and Acts 10:2, 22, 35, in which Paul interacts with a "devout and God-fearing" Roman army officer. The problem with these examples is that they are all non sequiturs. It does not follow that people of faith should

go to war or annihilate civilian populations just because some Roman military officials were very pious,

or a Roman could be baptized and remain a soldier at the same time, or Abraham wanted to kill massive numbers of people to save just one person, or people believe they are hearing the voice of God to liberate themselves through war. In none of these cases does it follow that the religiously faithful should kill civilians it only means that they have.

Conveniently, the Powerpoint presentation omits the mass slaughter of the Canaanites at the hands of the Israelites. When the Israelites returned to the land of Canaan under the military leadership of Joshua, they believed that a god or higher power called Yahweh told them to slaughter every man, woman, child, and goat in the land. The reason was that the Canaanites were full of sin because they did not practice the same Also included in the presentation are St Augustine's Qualifications for Just War, which are based on "just cause" (to avenge or to avert evil; to protect the innocent and restore moral social order) and "just intent" (to restore moral order, not expand power; not for pride or revenge). But when a people are fighting a war with such vague motivations as "restoring moral social order" or "avenging evil", almost any belief or practice, being founded on a different tradition or theology, might be deemed sufficiently reprehensible to justify killing civilians. Besides, St Augustine's Qualifications for Just War (at least as interpreted by the U.S. Air Force) is internally contradictory. Under "just cause", it states that war is permissible "to avenge evil", yet under "just intent", it states that war is "not" permissible "for revenge". Well, "revenge" and "to avenge" both refer to exacting punishment in a resentful or vindictive spirit. Both are founded in malice and hatred, so it does not make sense to say one is acceptable but the other is not acceptable in a document outlining your justifications for war.

religion and customs as the Israelites did not because the Canaanites were actually harming the Israelites. Today we would probably call the slaughter of the Canaanites genocide. Perhaps the chaplains who designed the curriculum for the "Jesus Loves Nukes" program knew that most people would have a hard time swallowing the argument that this Bible story, too, illustrates just cause for bombing civilians even though it is from the same "inerrant word of God" as the other passages.

The nuclear bombing of Hiroshima and Nagasaki during the Second World War were also cited in the document, and, naturally, the official excuse was invoked to justify these two humanitarian disasters, which resulted in the deaths of hundreds of thousands of innocent civilians. According to the official excuse, the Japanese and Germans made it clear that if they had made an atom bomb first, they would have used it against their enemies. The utilitarian rationale for bombing Hiroshima and Nagasaki, goes the argument, was that the Americans needed to bomb Japan's cities in order to prevent a ground invasion that would have cost many more lives. Of course, this is still hotly debated, and opponents argue that this is speculative, extremely hard to prove, and may even have initiated the Cold War. We will never know whether the Japanese and Germans would have carried out such an attack, but we do know that allied forces preemptively dropped bombs on German and Japanese civilians. 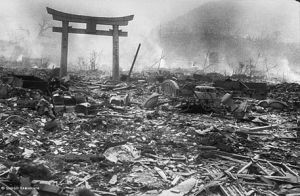 Similar disturbing, is a quotation by Nazi rocket scientist Wernher von Braun found on one of the document's slides. The United States arrested von Braun at the end of the war, brought him back to the United States, and used his scientific genius to help launch America's rocket technology program. During his tenure with the Nazis, von Braun admitted to handpicking Jewish labor slaves from the Buchenwald concentration camp to build the V-2 missiles which he designed, and which ripped through London. Somehow glossing over all of this hypocrisy and inconsistency, the U.S. Air Force went on to cite von Braun's religious moral justification for using missile weapons:

We knew that we had created a new means of warfare and the question as to what nation, to what victorious nation we were willing to entrust this brainchild of ours was a moral decision more than anything else. We wanted to see the world spared another conflict such as Germany had just been through and we felt that only by surrendering such a weapon to people who are guided by the Bible could such an assurance to the world be best secured. [emphasis von Braun's]

Essentially, then, the U.S. Air Force was citing a Nazi war criminal and slave-driver's idea of morals to teach officers that Christians should have control over weapons of mass destruction. Christians would decide with the utmost discretion which innocent groups of people deserved to be obliterated by atom bombs, because the Bible guides their moral decision-making (except for that pesky part about the slaughter of the Canaanites.) Theoretically, then, anything deemed Biblically immoral, such as homosexuality, adultery, fornication, or touching the skin of dead pigs, justifies bombing innocents in order to protect innocents and restore moral social order. At the same time, however, slavery would be okay, because the Air Force trusts the words of a Nazi who used Jewish slave-labor to build his bombs, and the Bible tells us that fathers can sell their daughters into slavery to pay debts (Exodus 21:7).

Thank goodness the program was cancelled. One might argue that it violated the United States Constitution's ban on religious tests for government office as well as the Establishment Clause of the First Amendment to the Constitution. In addition, it is highly dangerous to use the sacred text of warlike Bronze Age tribal leaders as a modern-day moral compass, or to distort Christian ethics as a pretext for the mass obliteration civilian populations especially when the motive for such action is so riddled with bad logic, tenuous assumptions, and biased textual interpretation. The Universal Life Church Monastery is glad to see Catholic and Protestant Christians defend human rights and stand up to the United States Air Force by contacting the Military Religious Freedom Foundation, and we hope that all branches of the U.S. military refrain from further religious war propaganda.

Weigh in on the discussion. Do you think it was appropriate for the U.S. Air Force to institute a training program which taught missile officers that there is religious justification for bombing civilians?