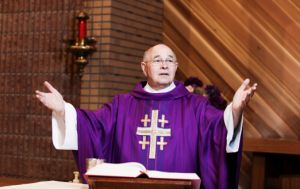 It might seem hard to believe, but the United Church of Christ (UCC) is suing the State of North Carolina for restricting religious freedom by banning its ministers from performing same-sex weddings. Churches that believe in equality are forced to defend the sacerdotal rights of their ministers on the grounds of religious liberty.

Turning the Tables on Equality Foes

The UCC filed the lawsuit on Monday, April 28th in conjunction with a dozen more clergy from various churches as well as several same-sex couples. In an ironic twist, the church is using the very same defense religious conservatives have used to challenge marriage equality. It claims that North Carolina's Amendment One, which bans the legal recognition of same-sex marriages and civil unions, infringes on their religious liberty. It asks the federal courts in the Western District of North Carolina to repeal the voter-approved ban to allow ministers to decide for themselves what weddings they conduct within their own churches.

Exactly how does Amendment One impinge on the rights of UCC ministers, as well as other clergy like ULC ministers, you might ask? Under the ban, a minister may only officiate a wedding for a couple who have obtained a legal marriage license. Officiating a wedding for a couple who have not obtained a license constitutes a Class 1 misdemeanor. Same-sex couples may not obtain marriage licenses under the ban. Therefore, ministers may not perform ceremonies for same-sex wedding ceremonies in North Carolina even religious ceremonies without committing a Class 1 misdemeanor.

We immediately see the grave injustice of North Carolina's same-sex marriage ban. Not only does it deny same-sex couples the equal rights of marriage, but it also denies ministers who perform same-sex marriages their equal sacerdotal rights. In fact, it does not just deny legal recognition of religious same-sex ceremonies, but it actively criminalizes those ceremonies.Essentially, the ban discriminates against ministers whose religious beliefs validate same-sex marriage, and it restricts their religious freedom to exercise those beliefs by performing such marriages. This is in contrast to the supposed religious "infringement" that conservative ministers would endure by the enactment of marriage equality; while they would not be forced to perform same-sex marriages, they would merely know that such unions were occurring.

It is almost unbelievable that same-sex marriage ceremonies can be criminalized because a license is impossible to obtain even if that ceremony is purely symbolic and religious. It is also disconcerting that the government should favor religious beliefs opposing same-sex marriage over religious beliefs supporting it. As ULC ministers, we should join UCC clergy in their struggle, because the same unjust laws affect all of us. Even if you disagree with such unions, if you are in favor of this instance of government favoritism, you remove your leg to stand on whenever you defend your own religious practices in the name of freedom.