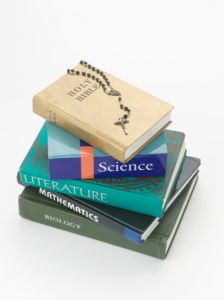 From Craft Store to the Classroom

The Mustang School Board borrowed the curriculum from the Green Collection, a collection of biblical antiquities assembled by Green and his family. The collection, which is currently being featured in the worldwide traveling exhibition Passages, is purportedly the world's largest collection of rare biblical texts and artifacts, boasting about 40,000 pieces. Green and his family also plan to create a permanent, non-sectarian Bible museum in Washington, DC, using the Green Collection as the core collection. The curriculum will use Bible stories to teach archeology and history in a one-year trial elective course.

But a draft copy of the curriculum betrays a motive that can hardly be described as neutral or scholarly. "[T]he course does explain the inspiration behind famous works of art and holds a prism to historical events", but "it also endorses behavior for religious reasons and implies that bad things happen as a direct result of disregarding God's rules", reports Bailey Elise McBride of the Associated Press. "The first pages of the Bible spotlight God's desire for justice and a just world," according to the second chapter, but, "When humanity ignores or disobeys his rules, it has to suffer the consequences". What has been billed as a history lesson quickly begins to look more like a Sunday school lesson.

The Teacher as Preacher

The risk of turning public schools into Sunday schools has also been criticized by the ACLU and FFRF. Andrew Seidel, a lawyer with FFRF, wrote to Mustang school district complaining that the course ignores negative aspects of God, such as jealousy, murder, and punishing children for their parents' actions. He adds that the course frames questions in ways that automatically favor a Christian perspective, asking questions like How do we know that the Bible's historical narratives are reliable?" rather than, "Is the Bible historically accurate?" The authors "assume the answer in the question and stifle all scholarly discussion", he points out.

Preserving biblical artifacts to show how they have influenced Western thought and culture is one thing, but teaching a public high school course that presupposes the veracity of the Bible is another thing entirely. Even though it is an elective course, students who do choose to take it may still be misled into thinking they are receiving objective and scholarly instruction. Hopefully Mustang School Board will see the flaws in Green's Bible curriculum and reverse their decision.