The Long Road to Acceptance

As we reflect on the tragedy in Orlando with heavy hearts, it's only natural to look for answers. Why did this happen? Some point to lax gun control laws, and others the rise in Islamic terrorism. Both are valid points, but let's put those issues aside for the moment. First and foremost, this was a hate crime. While details are still emerging about the shooter (whose name we choose not to mention), he has been described by those who knew him as bigoted and vehemently homophobic. It's become clear that this was not a random act of violence. The victims inside the Pulse nightclub, many of whom were members of Orlando's LGBT community, were targeted because of their sexual orientation.

In the wake of such a horrific event, it was encouraging to see the outpouring of support and prayers from people all across the country. Equality Florida, a local LGBT rights organization, has raised almost $5 million for victims and their families via a GoFundMe page. Numerous other relief funds have also been set up, and Disney decided to donate $1 million to help the cause. Especially moving were the lines that wrapped around the block outside blood donations centers thousands took time out of their days to help the shooting victims. 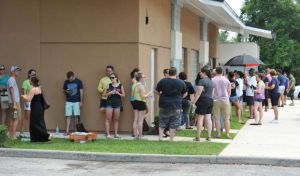 However, a grim hypocrisy has come to light during these relief efforts. Hundreds of gay people were among those who lined up hoping to donate blood, only to be turned away. The reason? Their sexual orientation. Astoundingly_,_ the FDA still has a rule which bans gay people from donating blood. This outdated policy was originally instituted in response to the AIDS epidemic back in the 1980s, before much was known about the disease. Although the FDA regulations have been revised recently, the ban still includes gay men who are sexually active even those who practice safe sex or are in monogamous relationships. It seems a grave injustice that in the year 2016 a gay person can be legally denied the opportunity to donate blood, especially when their community is in need.

As questionable as the FDA policy is, many places around the world still lag far behind the United States on the issue of gay rights. Russia, for instance, is notorious for its widespread discrimination against LGBT citizens. To offer just one startling example, the day after the shooting in Orlando, a gay Russian couple stopped by the American embassy in Moscow to pay their respects. They brought with them a sign that read "Love Wins" along with a bouquet of flowers. Police, evidently convinced they were staging a protest, promptly arrested the couple. Although they were later released, the incident highlights an attitude of intolerance toward gay people which is still pervasive in countries like Russia.

In the aftermath of such a tragedy, it can be all too easy to focus on the negative. More than anything, the events in Orlando help to highlight the global nature of this struggle for acceptance. Fortunately, acceptance is clearly winning evidenced by the many signs of solidarity which sprang up all over the world in response to the shooting. In Paris, the Eiffel tower was lit up with the rainbow colors of the LGBT movement. In Israel, Tel Aviv City Hall displayed the rainbow flag as well. The Town Hall in Melbourne, Australia followed suit. Vigils were held in Rome, Berlin, and many more cities. We find inspiration in these reactions, for they emphasize the existence of a broader global community which advocates for tolerance and seeks to put an end to homophobic violence.

Of course, signs of support only go so far. The first step in ending violence is identifying 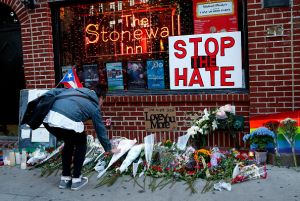 its source. Individuals such as the shooter in Orlando are corrupted by a vile ideology which leads them to act out in barbaric ways violence is just a symptom of their hatred. Thus, the solution to preventing events like this from occurring in the future is likely not as simple as increasing security measures or introducing new laws. True progress will come by targeting the source of violence, and dismantling the ideologies which lead to it.

As human beings, we are naturally afraid of that which we don't understand. Homophobia, then, is perhaps best addressed by demonstrating that there is no basis for hate or fear of gay people. A global awareness campaign could make for a positive first step. Despite all the progress that has been made, tragic events such as Orlando provide solemn reminders that the road to acceptance remains a long one. What do you think?

Is it realistic to hope for universal acceptance of gay people, or is that just wishful thinking? What should be done to prevent violent attacks in the future?