Strozzapreti might look innocent enough on the surface, it's just another type of Italian pasta. However, this unassuming food has a dark untold history.

The medium-sized corkscrew-shaped pasta noodles were created not only for scooping up those last bits of sauce, but also for suffocating gluttonous Catholic priests. Yes, you read that right.

Strozzapreti literally translates to "priest stranglers," and was developed hundreds of years ago by peasants in Italy who hated the Catholic priests.

The plan to murder priests with pasta reportedly dates back to the 1600's, when Italy was ruled by the notorious Papal States.

At the time, the Catholic Church controlled most aspects of daily life. The church owned everything roads, bridges, shops, taverns even the forests and mountains! Nothing escaped the influence of the powerful clergy who represented the church.

With no ruling authority to control them, the local priests and bishops raised taxes on the citizenry non-stop, claiming the payments would rectify their sins. But the reality was striking: the church and its constituents lived in lavish luxury, while the farmers and artisans they taxed into oblivion suffered.

These corrupt holy men of the time were not only hungry for power, they were hungry in the traditional sense, too.

The clergy would often descend into the villages, demanding feasts be prepared for them. The villagers would begrudgingly oblige, and would set about preparing food and drink. But they did so with intense resentment, and wanted some way to fight back against the unfair system.

Afraid of the backlash they and their families might suffer, the peasants had to be crafty in their attempts at vengeance. Thus was born the idea for an unsuspecting murder weapon: pasta.

The design of the strozzapreti pasta was carefully constructed: thick, chewy, and just long enough for a ravenous clergy member to easily choke on. The poor village housewives made the pasta by hand, silently praying curses into each twist of the dough.

It was not uncommon to shape the pasta in the form of a hangman's knot, increasingly the likelihood it would get stuck in the throat of some greedy priest who neglected to chew his food properly. If the legends are to be believed, every so often the strategy would work. The unsuspecting priest would find themselves suddenly unable to breathe, their face would turn beet-red, and they would die right there at the table. 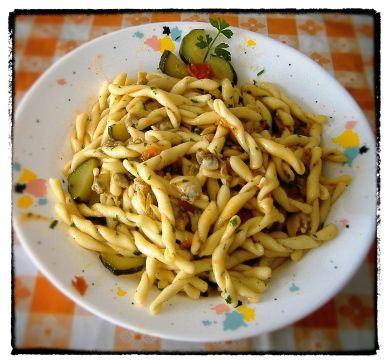 Pasta for the Ages

As time progressed, the anti-clergy sentiment grew stronger and stronger. As Italy fell victim to civil strife, its citizens fought to rid themselves of the bedeviled clergy and their incessant corruption.

At the height of this anti-clergy sentiment, strozzapreti took on a new meaning it was the name given to the knotted leather belts used by bandits and outlaws to assault priests they had hunted down.

Want to Try Some "Priest Stranglers"?

Visiting Italy today, you'll see little trace of the hatred the Italian people once had for corrupt holy men. However, if you're feeling adventurous, head into a local restaurant and order the strozzapreti a relic of the Italy's complicated religious past in pasta form. Just make sure to chew your food carefully!