The Legend of Stingy Jack and the Original Jack O' Lantern

As we inch closer to Halloween, the sight of carved Jack O' Lanterns sitting on front steps and porches becomes familiar. But did you ever stop to think why we engage in this curious tradition? Pumpkins have been carved and illuminated for centuries, yet few people know the origins behind the practice. How did we decide to start carving pumpkins, and how did they become a universally-recognized symbol of Halloween?

With the season of spooks upon us, it seems only fitting to explore the history of the Jack O' Lantern, and the lore that led to this now ubiquitous symbol. To tell this story properly, though, we must go back to the Irish legend of ol' Stingy Jack and his encounter with the Devil. 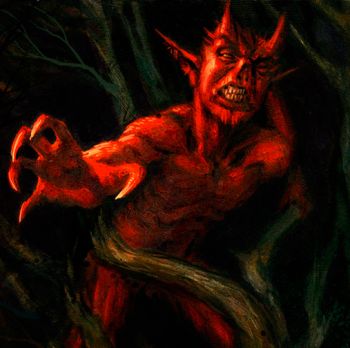 Dealing with the Devil

Stingy Jack was not well liked in his community; an overt drunk, liar, and manipulator, his poor reputation knew no bounds. It went so far, in fact, that the Devil himself heard rumors of Jack's malevolence. So intrigued was the Devil, that he had to see if the stories were true.

One dark Halloween night, as Jack stumbled home, he came across a body on a cobblestone path. Suddenly, the body arose and took the form of the Devil. Jack realized he was in trouble. Thinking fast, he offered the Devil his soul in exchange for one last drink. It was a deal the Devil could not refuse.

Back at the pub, the Devil turned himself into a coin to pay for Jack's drink. But rather than giving the coin to the bartender, Jack stuffed it into his pocket where he also kept a silver cross. Held captive and unable to escape, Jack made the Devil agree to leave him alone for a period of ten years. The Devil agreed. Jack took the coin out of his pocket, and the Devil went free.

Exactly ten years later, the Devil returned. This time, Stingy Jack was prepared. Before the Devil could claim his soul, Jack convinced him to climb an apple tree and retrieve a piece of fruit so Jack could enjoy one last earthly delight before his soul was collected. And so up the tree did the Devil climb, to pick the biggest, shiniest apple available. As he did this, Jack quickly surrounded the tree trunk with crucifixes, ensuring that the Devil couldn't come down. Once more the Devil was held captive. This time, Jack made the Devil promise that he would not come for Stingy Jack's soul even after he died. Seeing no way out of the trap he'd fallen into, the Devil reluctantly agreed. 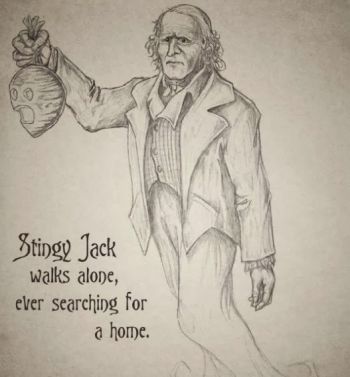 The Jack O' Lantern is Born

Upon his death, Jack went to the Gates of Heaven and asked for entrance. But so terrible were his sins on Earth, that his request was denied. With no other options, Jack was forced to go down to Hell where he begged the Devil to allow him to enter. However, the Devil would not go back on his promise and refused to claim Jack's soul.

Denied entrance to Hell, and unwelcome in Heaven, Jack found himself doomed to walk between the worlds of the living and the dead in endless night. Unable to navigate in the dark, he pleaded with the Devil to give him a light. As a final parting gesture, the Devil offered him a single ember from the eternal fires of Hell. Before embarking on his journey, Jack placed the ember in a hollowed-out turnip (his favorite food, which he always kept close at hand) to help illuminate the way. From that day on, Stingy Jack has roamed the eternal darkness between worlds, guided only by the light of his makeshift lantern.

From this legend grew a European tradition of carving wicked faces into turnips and beets in hopes that the scary faces would keep ol' Jack away. These fruits were then hollowed out, and illuminated from within using coals from the fireplace. However, carving a turnip or beet is not easy to do, and once the Europeans began to colonize what is now the United States, they were introduced to the pumpkin. Larger than beets and turnips (and much easier to carve) pumpkins quickly supplanted their smaller relatives to become the standard canvas for Jack O' Lanterns.

Fast forward to today, and Jack O' Lanterns can be found on nearly every porch during Halloween - often with extravagant designs that took hours to perfect. And while they make for great holiday decorations, its unclear whether they're actuallyeffective in warding off Stingy Jack.